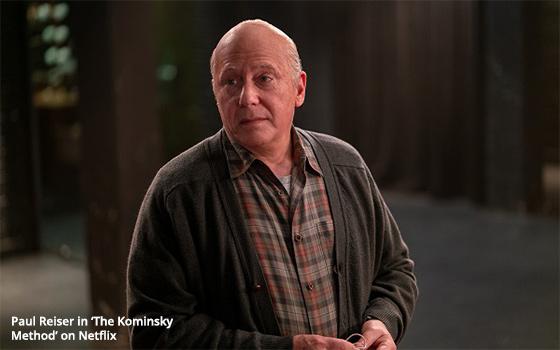 Rare as such moments are, once in a while a dramatic scene on a TV show has everything necessary to send a jolt right through you.

One such moment occurred while binge-watching the current eight-episode second “season” of “The Kominsky Method” on Netflix recently. The word “season” is in quotes because these single-digit flights of new episodes do not feel like real TV seasons to me.

If they were, then I would be able to enjoy “The Kominsky Method” over the course of eight weeks, rather than blow through them in one or two evenings.

Oh, well -- that’s binge-watching for you. On the one hand, you get to see all of the episodes of a show you like in one or just a few sittings. But at the same time, the experience is over much too quickly.

The scene in question came at the end of the sixth episode of the recently begun new flight of “Kominsky Method” episodes. This is the show starring Michael Douglas in the title role -- a man named Sandy Kominsky who runs his own self-styled, “serious” acting school in Los Angeles.

His best friend is a man named Norman, chairman of a powerful Hollywood talent agency who is recently widowed and almost never goes to the office. He is played by Alan Arkin, and the scenes in this show featuring Sandy and Norman are a wonder to behold -- hilarious and poignant.

“The Kominsky Method” is made by Chuck Lorre and his team of producers who have worked on his other hit shows on CBS. In one scene this season on “The Kominsky Method,” two of Sandy’s acting students decided to reenact a scene from “Two and a Half Men,” and met with disapproval from their instructor Sandy.

In another scene, Sandy had a verbal showdown with guest-instructor Allison Janney -- the star of “Mom” on CBS (also a Chuck Lorre show) who played herself -- after she blithely shared her opinion that acting is little more than mimicry done really well, and that finding one’s emotions or applying one’s real feelings to the task had nothing to do with it. This approach flew in the face of everything Sandy was trying to teach his students.

Which one of them is right? Perhaps different methods work for different actors. Where Paul Reiser is concerned, he found something somewhere to deliver a soliloquy from the stage of Sandy’s acting class that was a masterful piece of acting.

In the show, Reiser, 63, plays Martin, a retired high school teacher who takes up with Sandy’s daughter Mindy (played by Sarah Baker), who is half his age, more or less.

Since Martin is closer in age to Sandy than he is to Mindy, he and Sandy begin to bond. And since Martin has been casting about looking for something to do in his retirement, Mindy encourages him to try Sandy’s acting classes.

The soliloquy he delivers represents Martin’s first time on Sandy’s stage, after Sandy orders him to face the class, introduce himself and talk about why he has come to acting school. Reiser then gives this summation of this portly, ponytailed, retired schoolteacher’s life that moves everyone in the room, including Sandy -- and those of us watching at home too.

It is a soliloquy about life, loss, the past, the present and the future -- the last being particularly pertinent since Martin is recovering from a recent heart attack and, as a result, feels as if he is staring mortality in the face.

This scene will stand by year’s end as one of the finest moments seen anywhere on television this year.

netflix, streaming, television
1 comment about "The Reiser Method: Actor-Comedian Performs His Masterpiece".
Check to receive email when comments are posted.
Next story loading