Cover Story: The Impeachment Of You Know Who 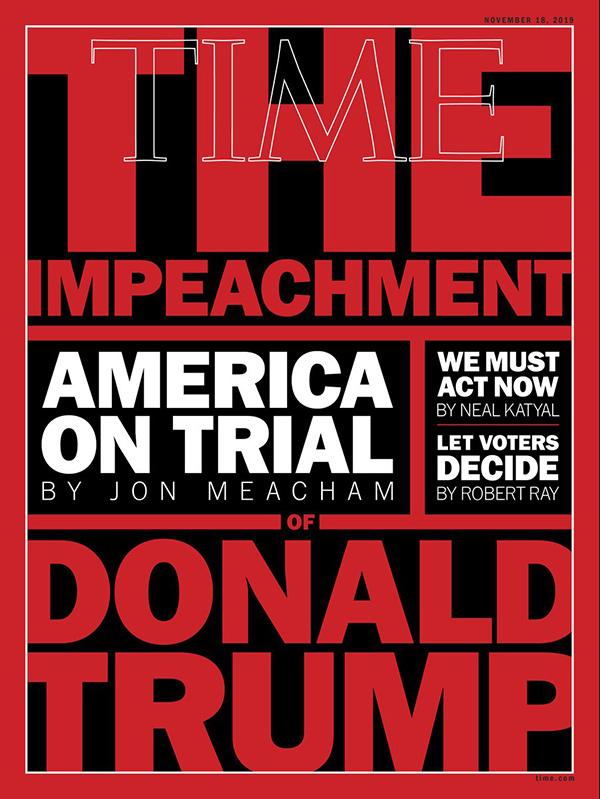 What is black and white and red all over? When it's the cover of Time magazine, it's a publishing statement that the subject is existentially important. (Its most famous use was for the April 8, 1966 "Is God Dead?" cover.)

"THE IMPEACHMENT OF DONALD TRUMP" cover hitting newsstands and browsers now isn't nearly that simple, but neither is its subject. It includes two supporting sell lines: "WE MUST ACT NOW" By Neal Katyal and "LET VOTERS DECIDE" by Robert Ray, indicating the answer may be no simpler than the question it posted in its 1966 cover.

"The new issue of Time features a cover package on the debate over the possible impeachment," the magazine acknowledges in a press release, adding an excerpt from Pulitzer Prize-winning historian Jon Meacham:

The rise of Donald Trump, and the reflexive resilience of his public support, has produced a singular American moment. The start of public impeachment hearings in Congress on Nov. 13 marks the beginning of a test for the country. As the debate over impeachment and removal unfolds, the nation’s immediate and long-term future depends on whether Americans will be guided by reason rather than passion, fact rather than faith, evidence rather than tribe.”

Meacham continues: “Here we are, then, trapped in a time of demagoguery, reflexive partisanship and a Hobbesian world of constant and total political warfare. We know all the factors: the return of the kind of partisan media that shaped us in the 18th and 19th centuries; relentless gerrymandering that has produced few swing congressional districts; the allure of reality-TV programming that has blurred lines between entertainment and governance....

"The fate of this presidency, of the ensuing elections and of our true course lies in two sets of hands. The first is the House and the Senate, the second the electorate that will determine the outcome of the 2020 campaign. The past and the present tell us that a demagogue can thrive only when a substantial portion of the demos—the people—want him to.”

Neal Katyal on the case against Donald Trump: “This isn’t about impeaching a President. It’s about coming together around our shared belief that no one is above the law—and making sure our democracy is never this vulnerable to attack again. It’s about putting aside our differences, and not only holding out America’s motto as a goal to which we aspire but working every day to make it a reality.”

Robert Ray in defense of the President: “At this point nothing appears to stand in the way of the House’s intemperate and unreasonable vote to impeach. In Hamilton’s words, events are proceeding “more by the comparative strength of parties than by the real demonstrations of innocence or guilt.” It will be left instead to the U.S. Senate sitting as a court of impeachment with the “requisite neutrality” and the nation’s best interests in mind to render judgment and put a stop to what is an undeniably, and all but exclusively, partisan effort to remove this President from office.

"Only then can the country return to the business at hand, which is the fast-approaching 2020 election, now less than a year away, and the other important and pressing matters before the nation.”