Noting that two of the category’s biggest players — Netflix and AT&T — already are spending about $1 billion each annually to market their SVOD (subscription video-on-demand) services direct to consumers, a new GroupM Business Intelligence report makes the case that SVOD marketing “could spend incremental billions on advertising each year.”

“Partnerships with hardware companies, call centers and subscriber management, streaming delivery and other costs will add billions more,” adds GroupM Business Intelligence Global President Brian Wieser, noting that the category war is not without its consequences: “There are the costs of cannibalization. New services may cause cord-cutting to accelerate or cause consumers to actually reduce what they are spending on video services. For example, greater numbers of consumers might decide that traditional free-to-air broadcast channels paired with a collection of SVOD services are a more than sufficient replacement for traditional cable, at a much lower cost.”

The analysis, which focuses mostly on the multibillion-dollar commitment SVOD services are putting behind content development and acquisition — “easily” reaching $30 billion annually by 2024, according to Wieser — the marketing spending should not be surprising. 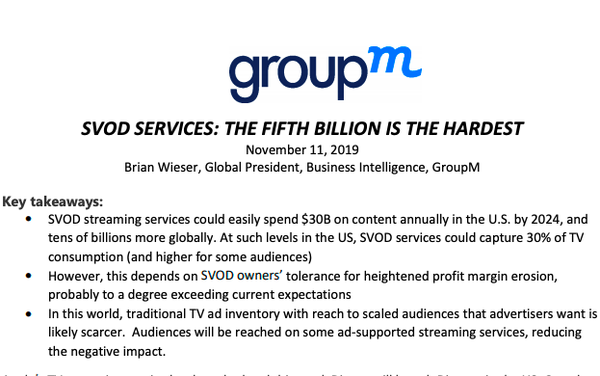