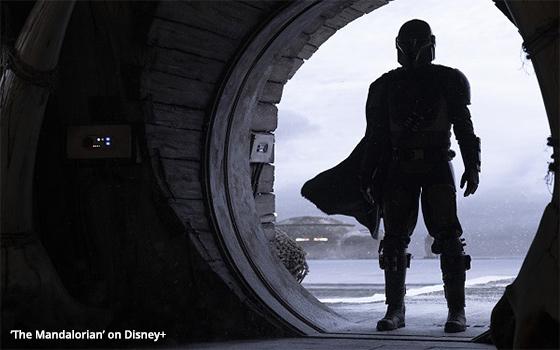 How shall we compose the lead sentence for this TV Blog that will attempt to at least make a start at analyzing how the just-beginning subscription streaming wars will change or otherwise impact TV?

This is what I keep coming back to whenever I contemplate the sheer tonnage of video content that is now available to watch -- whether for free or by subscription -- online and on television. And that is just at the present time. There are two more majors yet to launch: Comcast/NBCU (Peacock TV) and WarnerMedia (HBO Max) -- both coming next year.

Thus, you have a situation where the volume of available TV content to watch has been exploding for roughly a decade or more already, and now it is starting to explode even more with the launch of Disney+ this week (featuring “The Mandalorian,” pictured above) and the other two mentioned above waiting in the wings.

And yet, to state the obvious, the hours in each calendar day remain constant at 24 hours -- one-quarter to a third of which is spent sleeping, and perhaps another third is spent working (or faking it). So much television, not enough time.

So if the hours in a day remain constant, and the amount of video content to watch in those hours (or at least the waking and non-working hours) has multiplied over and over again for years, then wouldn't this represent a glut on the marketplace?

Astute readers may have already guessed this, but your TV Blogger is not an economist. And yet, I am willing to hazard an educated guess that the answer to the glut question above would be yes.

The result will be diminished audiences for everything -- a phenomenon that has already long been at work in advertiser-supported broadcast and basic-cable television.

The more there is to watch, the more it is spread out over so many channels and platforms that nothing today short of the Super Bowl attracts anything close to what was once known as a mass audience.

Ergo, if we are now to have even more tons of content available, then the audience “pie” has the potential to be whittled down in a process by which mere crumbs of viewership are apportioned to literally hundreds of TV shows.

Truth be told, it might be high time to drop the “pie” analogy that has been in use for a decade or two when talking about the fragmentation of TV audiences. The idea of audience “slices” is outmoded. “Crumbs” sounds more like it.

It is reasonable to assume that the giant media companies launching these streaming services are not doing so to lose money. Therefore, they must assume (or are at least gambling) that they can justify the considerable costs involved in mounting these new services by pricing their subscriptions accordingly.

For a period of time, the subscription streaming option will exist alongside legacy options (i.e., regular TV) for watching video content. These choices already exist.

But it is not unreasonable to foresee a day when all TV will be consumed in a subscription, online way. And if that is the case, what will happen to the kind of TV in which commercial time is sold?

Perhaps in a way similar to the way cable TV began years ago with subscription fees providing the only revenue stream, and later added advertising as a second revenue source, the subscription streaming services will also start out depending solely on subscriptions to earn their money.

Here is a prediction: At some point, sooner or later, once the streamers are well-established, advertising will elbow its way into the streaming content too.