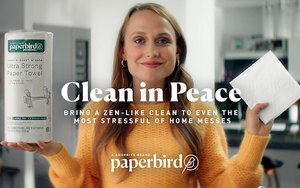 Over the next 18-24 months, ShopRite will rebrand its private-label products, representing some 4,000 stock-keeping units, to emphasize high quality and low price. Two campaigns that broke today introduce the new Paperbird brand for household goods and Bowl & Basket for food products.

“For ShopRite to remain competitive, we had to reimagine the way we thought about our own brands,” says Laura Kind, director of marketing and packaging at Own Brands, which like ShopRite is a unit of Wakefern Corp., reportedly the country’s largest retailer-owned cooperative.

Called “Clean In Peace,” the Paperbird campaign positions ShopRite’s household products as items that can transform moments of rage -- caused by people who create in-home messes -- into calm. In a spot running on television and digital platforms, Paperbird paper towels come to the rescue when people are careless with things like coffee and a cheesy orange snack.

The Bowl & Basket campaign, titled “For Life’s Recipe,” celebrates the ingredients of everyday moments by connecting them using the ampersand in Bowl & Basket. In one spot, a father and son are seen driving to a ShopRite to shop and then gorging on a bag of Bowl & Basket sour cream and onion chips on the way home.

ShopRite used shopper loyalty data “to understand what items are being purchased, but not in terms of the aesthetics of the brands,” Kind tells Marketing Daily. For the latter, the company used surveys and focus groups.

ShopRite’s main household shopper “isn’t as female over-indexed as you would think,” she adds, with a roughly 55% to 45% female-male split. “So it’s important in creating this campaign to not only appeal to the female demographic.”

Hence the father and son commercial, “which was well received by men with children.”

In addition to TV and digital, the supermarket chain is running the campaign, created by the Kansas City based Barkley agency, via out-of-home and radio in the nine states where ShopRite stores are located.

The company’s existing private-label brands include ShopRite and ShopRite Kitchen.

In a nationwide survey this year, the Private Label Manufacturers Association said two-thirds of consumer respondents agreed that in general, store brand products they’ve purchased are just as good if not better than national brand versions.