Congressional Hearings Once Made A Splash, But Not Anymore 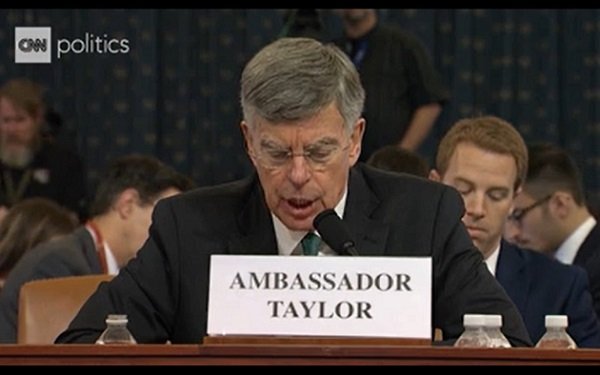 There is a whiff of nostalgia in the air surrounding the impeachment hearings that began to air live on various channels on Wednesday.

With their decision to open up the proceedings to television cameras, the Democrats evidently wished to make a bigger splash in the court of public opinion than they were making up until this week.

Perhaps they had in mind the great impact made in decades past by televised congressional hearings that have become a part of our national lore.

They are an integral part of high school history classes and college media-studies courses -- the Kefauver hearings on organized crime (1950), the Army-McCarthy hearings (1954), and the Senate Watergate hearings (1973), to name the best-known of them.

These events made an impact on TV because of their importance certainly, but also because television had an impact in those days that it does not possess today.

Or to put it another way, House Democrats who think that televising these Trump impeachment hearings will have nearly the same impact as these previous televised hearings are in for a surprise.

Those other hearings -- at least according to countless high school history teachers and college professors -- were hugely impactful. And one big reason would be that they happened to take place in the era when television was still a powerful national medium.

Some might argue that television is still powerful today. And maybe it is, when one adds up all the channels, all the content, all the money that flows into it, and all the hours every day that people spend watching it, whether at home or on the go.

But it is no longer powerful as a national medium shared by one and all. The combined audiences for this week's televised impeachment hearings will be minuscule compared to the hearings of yesteryear.

Nobody sits around watching televised hearings anymore. There is too much else to do (such as playing video games) and watch (thousands of TV shows).

More than likely, most people will find out what happened in the hearings from today's leading sources of news -- the partisan evening talk shows on the news channels and the late-night monologues.

While these are not technically “news sources,” this is where people go to get their news fixes each evening. There, they will find the facts, but laden heavily with biases and opinions.

Those who support the congressional impeachment effort will gravitate toward the talk shows on MSNBC and CNN. There, they will learn why the impeachment hearings were huge victories for the forces of impeachment.

Those who are against the impeachment will go to Fox News. There, they will hear all the reasons why the impeachment proceedings are a sham, and the day's hearings a big waste of time.

A great deal of energy is going into mounting the hearings, putting them on TV, and then talking about them incessantly afterwards. The media -- TV, newspaper Web sites, politicians -- makes a lot of noise, but in the end, the result will be very little understanding, and certainly not unity.

news, politics, television
1 comment about "Congressional Hearings Once Made A Splash, But Not Anymore".
Check to receive email when comments are posted.
Next story loading