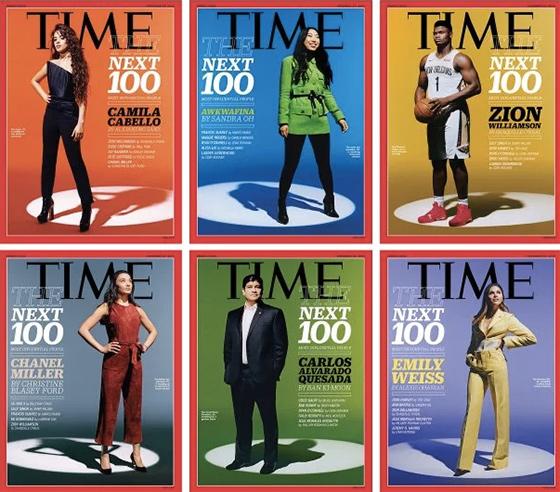 Time magazine’s annual “Time 100,” which lists the most influential people of the year, has expanded to a new franchise called “Time 100 Next,” released yesterday.

The new list names “100 rising stars who are shaping the future of business, entertainment, sports, politics, health, science and activism and more,” according to the publisher.

The Time magazine double issue, dedicated to the "Time 100 Next," has six covers. It's out November 15.

The franchise is supported by a full digital package, with video interviews and photos.

"When we first published our 'Time 100' list of the world’s most influential people 15 years ago, it was dominated by individuals who rose through traditional power structures: heads of state, CEOs of public companies, actors from big-budget blockbusters, leaders of global foundations,” Time editor-in-chief-CEO Edward Felsenthal wrote in a letter announcing the list.

“What has been striking about more recent editions is the growing number of individuals who did not need an establishment to command international attention,” Felsenthal said. “The nature of influence is changing.”

Felsenthal called the 'Time 100 Next' list “part of an ongoing expansion of our flagship 'Time 100' franchise.”

Like the "Time 100," the "Next" profiles are usually written by more established influencers. Awkwafina's profile, for example, is written by fellow Asian-American actress and Golden Globe winner Sandra Oh.

International political leaders on the "Time 100 Next" list include Magid Magid, Shinjiro Koizumi and Jesse Klaver.

Fourteen-year-old figure skater Alysa Liu is the youngest person on this year’s list. The oldest person on the list is 44-year-old Ayman Odeh, the leader of Israel's Joint List bloc.