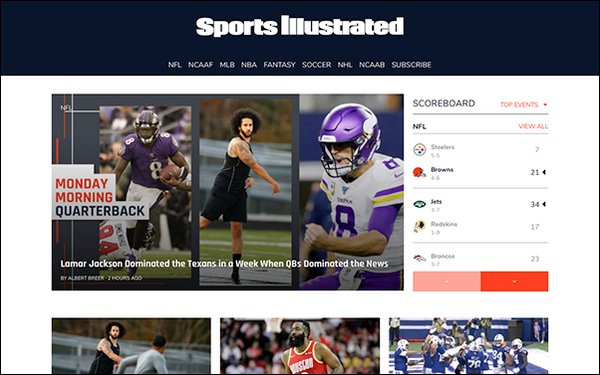 Sports Illustrated has transitioned to the Maven’s tech platform and reports boosted engagement.

According to the Maven, Sports Illustrated’s page load speed increased by 300% and its user engagement and page views per session increased after moving to the new platform.

A redesign is slated for January 2020. SI is set to add a digital membership product in addition to other print subscription options.

Also launched under the new SI business model: 80 new team channels that focus on college football, the NFL and the NBA and tap the talent of local market journalists. The channels, which will eventually cover every major sports team in North America, added more than 4 million users during its first month and published more than 5,000 stories that included videos and commentary.

As SI looks to its digital future, the brand plans to boost its core magazine product with higher quality production, paper weight and investment in journalism.

Last week, the Maven announced SI would follow a monthly print cycle as opposed to bimonthly, which it began in January 2018. With the monthly issue, the Maven plans to publish additional special issues in Olympic and World Cup years, along with SI Kids and celebratory issues.

The news from SI follows the departure of the brand’s EIC Chris Stone in October, ahead of a slew of controversial layoffs.

SI was acquired by Authentic Brands Group for $110 million from Meredith in May. ABG licensed SI’s media operations to the Maven in early October.