GroupM Unveils Marketing-To-Ad Spending 'Multiples,' Finds No Pattern On Which Is Winning -- Yet

To illustrate the relative role paid media-based advertising has in the overall marketing mix, GroupM Business Intelligence analyzed a subset of some of the world's biggest marketers and came up with "multiples" for their marketing-to-advertising ratios.

Not surprisingly, the analysis shows that overall marketing expenditures are more than twice that of ad spending. But analyzing it more granularly, GroupM was able to isolate a subset within the subset for which explicit marketing-to-ad spending data was available, and this group reveals a slight "dip and spike" in ad spending between 2017 and 2018, suggesting some volatility.

While the data is not yet "conclusive," and more years of data will be needed before an empirical pattern can be established, GroupM Business Intelligence Global President Brian Wieser says it could be a constructive baseline for looking at the relationship between overall marketing and media spending.

"We can infer that spending on marketing amounts to around $1.6-1.9 trillion annually around the world. More broadly, the relative stability of the range provides some confidence about the size of marketing spending," he writes, adding: "Assuming the ratio of marketing to advertising holds up across the global economy, and assuming advertising accounts for $650-700 billion (depending on definitions of the industry used), we can say with some confidence that marketing accounts for somewhere between $1.6 trillion to $1.9 trillion globally."

Wieser also estimates that conventional paid media-based advertising is about $700 billion of that total, and the fact that "no clear trend" has yet emerged for which side of the mix is rising or falling faster, industry assumptions that digital is driving a shift toward "performance-oriented" marketing may be, so far, unfounded. 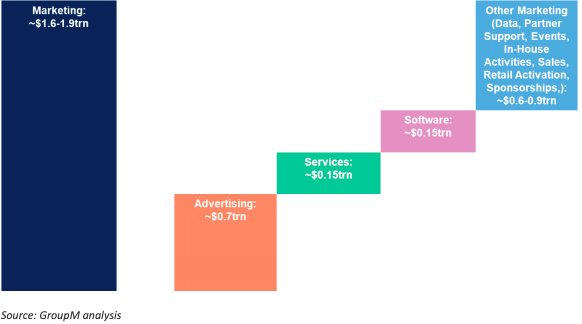