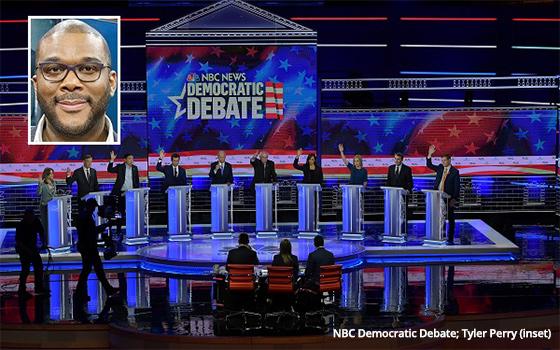 The key question for Wednesday night's Democratic Debate on MSNBC: Will Madea be there?

The TV Blog is well aware that many will take this prime-time debate seriously because to them, the future of the world feels like it is at stake. Well, maybe it is, and maybe it isn't. All I know is, this debate will take place in Atlanta in a facility known as Tyler Perry Studios.

When I learned that, my mind naturally wandered and in the process, made the logical connection between the Democrats, Tyler Perry and his most famous character -- the outspoken Madea.

Perry has made (and starred in) 10 Madea movies since 2005. Some of them air more or less constantly on basic cable. Which one is the best? That's the real debate!

Why bring up this subject? Probably because after four Democratic debates already this year -- including two that were so unwieldy that they went for two evenings each, for a real total of six debates (totaling up to 18 hours in all) -- a kind of delirium has set in where these Democratic debates are concerned.

To get the details out of the way, this week's Democratic Debate is scheduled to air live from 9 p.m. to 11 p.m. Eastern on MSNBC on Wednesday night (Nov. 20). MSNBC is putting this debate on in association with The Washington Post.

The debate will also stream live on both the MSNBC and WaPo websites.

The moderators will be Rachel Maddow, Andrea Mitchell and Kristen Welker -- all from NBC News -- and Ashley Parker, who covers the White House for The Washington Post.

And that's the show: Ten Democratic hopefuls each trying their best to give a performance that will earn them campaign donations, poll numbers that don't register as hashmarks, and perhaps most importantly, the right to move on to the next round -- this year's sixth debate scheduled for next month in Los Angeles.

This debate process seems more like “Dancing With the Stars” every day. These debates are made-for-TV spectacles, with high expectations for viewership from both the networks that carry them and the candidates who participate in them.

And it's true: They do pretty well. The biggest audience so far this year for one of these was 18.1 million for Night Two of the first debate last June. The lowest was 8.34 million for the most recent debate just last month.

This week in particular, the debate would seem to be particularly timely with the Trump impeachment hearings also going on, and also on TV. This one-two punch of political events animating both the Big News Media and the people who read and watch it all might lead to robust viewership for this week's debate.

Or maybe not. One of the characteristics of these debates that seems anachronistic is their length. Although this one is mercifully scheduled for a mere two hours, many of them are three hours, and as such, are not easy to sit there and watch for such a long time.

Attention spans get shorter all the time. Just about the only thing anyone will sit still for three hours to watch these days is a football game on a cold Sunday afternoon in late fall. Football games have action. Debates do not.

Of course, some might debate that last point. And even a cynic can concede that these political debates have their moments.

But this debate this week is the fifth one. The debate participants who have been on this debate tour since the first one last June seem overexposed. What is there left to say when we have heard all of it before?