Anheuser-Busch's Ritas Might Finance Trip Home To Meet The Parents 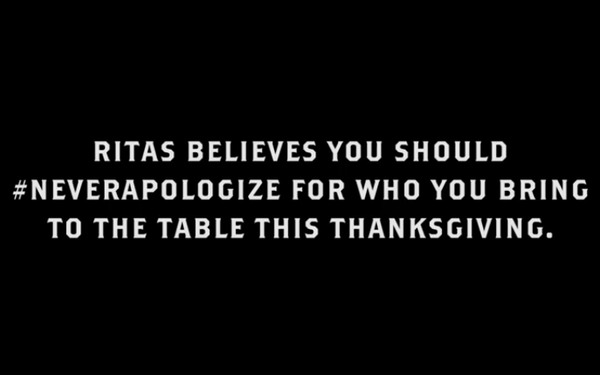 Anheuser-Busch brand Ritas, with a strongly loyal bunch of younger, mostly female drinkers, is not shy about putting romance into its marketing mix.

And for the holidays ahead, it’s offering to play its part in a real game of “Guess Who’s Coming to Dinner.”

It’s offering to pay 20 winners of an Instagram video contest $1,500 each toward a flight to their parents’ home for the holidays, with this hook: They must take along their significant other, whom Mom and Dad have never met (or possible even known of) before.

Winners will also get a case of Cran-Ber-Rita, a newly resurrected flavor in the lineup of the sweet-tasting, potent (8% alcohol content) beverage brand.

Entrants have to go to Ritas’ Instagram page, by the end of Tuesday, Nov. 19, to post a video explaining why they’ll never apologize about their choice of mate. The winners will be announced on Wednesday.

Ritas cites research that says 70% of adults 25-34 are scared to bring their new mate home to meet the parents. And In an ad Ritas produced using actors — but real stories — the dynamics of that first meet with the parents seems painfully real.  That includes a gay man whose trip home for the holidays with his boyfriend was also a coming out to his parents.

Ritas is a category Anheuser-Busch helped start with Bud Light Lime-a-Rita. As the brand gained popularity quickly, the company added lots of flavors, and Ritas now stands on its own.

In fact,  there’s a growing Beyond Beer Brands division at Anheuser Busch, where Chelsea Phillips is the vice president and enthusiastic cheerleader for the oldest non-beer in the stable.

For Ritas’ “ambitious single, 21-29 year old” female demographic, happ- ending love stories and sticking to your guns is a lure, she tells Marketing Daily. “They’re in a phase of their lives of having fun and that includes drinking and cutting loose. They’re joyful, not apologetic,” Phillips says, nearly slipping in the brand’s #NeverApologize branding message.

The going-home stories in the ad are meant to resonate with women and men who want their parents to accept that new lover in their life — and Ritas is saying that it’s the beverage that’s  giving them agency.

Phillips frets about the difficulties of growing what she actually calls a “legacy” brand like Ritas -- the old lady of the flavored malt beverages category after being in existence for all of seven years. Phillips says Ritas will produce 800,000 barrels this year, but it’s an “uphill climb these days, with so many new beverages coming out every year.”

Anheuser-Busch will invest $100 million in the alcoholic drink category in the next year.  At the moment, hard seltzers are all the rage. The company already produces Bon & Viv and Natty Light (an offshoot of college-age beer drinkers’ favorite party brew Natural Light beer). Coming in January is the new Bud Light Seltzer in flavors like mango, strawberry, black cherry and lemon-lime.

Still, Ritas rolls along. “Fifty-one percent of the nation has never heard of a hard seltzer, so there’s a lot of runway,” Phillips says, and the same is true of malt beverages. On either end of the country, she says, it’s easier for brands to blast media with marketing -- and Phillips says, people have been conditioned to try new things more than consumers in the middle of the country.