'Well, Ambassador And Mr. Morrison, I Have Some Bad News For You' 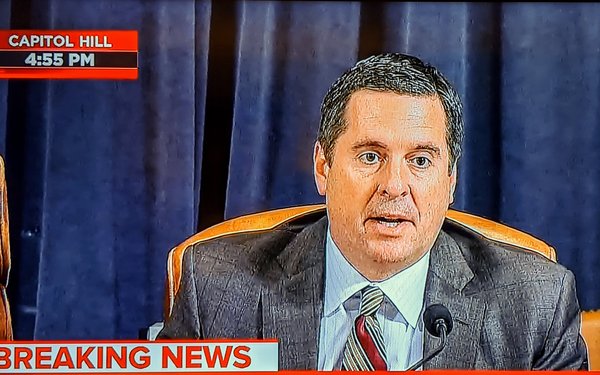 The "bad news," according to House impeachment inquiry hearing Republican ranking member Devin Nunes, is that "ratings are way down, way down."

Turns out the Republican minority cannot even be honest about something as easily checkable as Nielsen ratings.

Nielsen's common coverage ratings for day two of the inquiry on Nov. 15 were down 6.5% from the opening day on Nov. 13. Ratings for today's hearing featuring testimony from Ambassador Kurt Volker and Presidential advisor Tim Morrison, as well as testimony earlier in the day by Lt. Col Alexander Vindman and Vice President Mike Pence aid Jennifer Williams won't be available until at least tomorrow.

Nonetheless, Nunes consoled the Voker and Morrison not to "hold it personally. I don't think it's you guys."

Instead, he blamed "the Democrats," saying that the "American people aren't buying it."

Nunes comments reaffirm the notion that the Republican minority's strategy is not to get people to change their minds, but to get them to change the channel.

Whether a 6.5% fall off in Nielsen ratings constitutes "way down," may never be clear.

But today's hearings also don't exist in the kind of insular TV media vacuum that the previous impeachments took place in. Much the way that some pundits attribute declines in live sports ratings to the fact that play-by-plays and scores are now easily available in real-time on their phone takes away some of the impetus and necessity for viewing a process in real-time, especially when most Americans know they'll be able to catch the highlights on the evening news or late night talk show monologues.

But given his penchant for big Nielsen ratings, I'd like to suggest the President take up Speaker Nancy Pelosi's call that he provide testimony -- not in written form -- but live at the televised hearing.

C'mon, you know you can't resist.

2 comments about "'Well, Ambassador And Mr. Morrison, I Have Some Bad News For You'".
Check to receive email when comments are posted.
Read more comments >
Next story loading