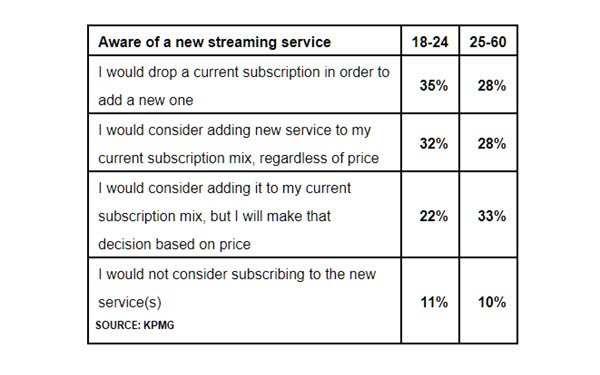 And next to price, being ad-free is the most-cited factor in determining how consumers pick streaming services.

KPMG conducted two web-based surveys about the factors that drive choices of streaming services among U.S. consumers who confirmed that they have access to at least one video streaming service (selection methodology, projectability and margins of error not stated in report). The surveys, concluded October 3, yielded 1,025 responses from consumers aged 15 to 60, and 1,030 from those aged 18 to 24.

Just under 70% of the younger group and nearly 80% of the older group are currently paying somewhere between $10 and $40 per month for streaming subscriptions.

However, under 10% of each group would pay in excess of $30 more — and fully 24% of the younger group and 16% of the older group said they wouldn’t be willing to pay any more to add more services.

In fact, price is the dominant factor in picking a streaming service, cited by 67% of the older group and 52% of the younger group.

(Respondents were asked “What features are most important to you when choosing a video streaming service?,” but instructed to check all that apply.)

“Younger consumers prefer an ad-free environment, but re willing to sit through ads to reduce cost,” sums up the report.

Content (“Content is most important; others are secondary”) was chosen by 48% and 36% of the older/young groups, respectively.

All consumers want access to a broad content mix including original series and a substantial library of movies/TV series, notes KPMG. For younger consumers, in addition to price, the mix of content and topics, as well as a continuous supply of video content, are important factors.

Three-quarters (64%) of each age group report having access to two to three streaming services (whether or not they’re the primary subscriber), with slightly more of the younger group reporting access to only one service (22% versus 18% for the older group).

Not surprisingly, devices of choice for streaming vary somewhat by age.

Laptops/computers are most frequently used by 18% and 10% of the younger/older groups, respectively, and gaming devices by 6% and 3%, respectively.

The report summary can be downloaded at no charge.