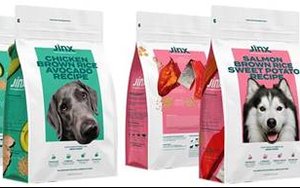 If you know how to sell mattresses directly to consumers, why not try dog food?

That’s the vision of three former executives from the Casper mattress company who in January will launch Jinx, which is being positioned as a premium, direct-to-consumer pet wellness brand that celebrates “modern doghood.”

Jinx actually considers itself a Direct-To-Dog proposition, to the extent that it has trademarked the term. Some of its physical marketing materials, including direct-mail items, will be scent- and taste-based to “give dogs a say in what goes into their bowl,” according to co-founder and CEO Terri Rockovich, who spent four years at Casper.

“Wellness has been a trend for the past decade for humans,” Rockovich tells Marketing Daily. “I think it’s starting to make its way into the pet category, but we have yet to see a fully comprehensive pet-wellness brand that focuses exclusively on dogs.”

Jinx’s startup backers include actor Will Smith, rapper NAS and singer Halsey, and venture-capital firms with deep roots in the direct-to-consumer world. Those firms’ investments have included stakes in D2C startups Harry’s, Peloton and Warby Parker.

“Our collective experience is on optimizing the direct-to-consumer relationship,” Rockovich says of herself and co-founders Sameer Mehta (whose first dog was named Jinx) and Michael Kim. Among other D2C attributes for brands she cites are “ease of convenience, transparency, a 360-degree feedback loop, complete control over brand experience and, ultimately, the runway to innovate as informed by customer data and shopping behaviors.”

Jinx will use out-of-home media, digital channels and search at the outset to create awareness. OOH will begin in New York, Los Angeles and San Francisco with “messaging that is both at a human eye level and a dog’s eye level,” says Rockovich.

Initially, Jinx will sell calorically balanced kibble and treats containing ingredients like organic chicken through its website. But brick-and-mortar sales are part of the plan going forward.

“Absolutely. I think it’s a really natural extension and in-real-life touchpoint that’s kind of critical for a wellness brand. Our highest-level objective is establishing that relationship directly with the consumer, and then I would say the next order of business is being where the consumer wants to shop.”

Jinx notes that 75% of millennials own a pet and many consider puppies and dogs to be “starter children.” In addition to other food and nutrition launches, the company plans to sell “technology-enabled pantry accessories.”

The creative agency involved with the launch is Manhattan-based &vest.