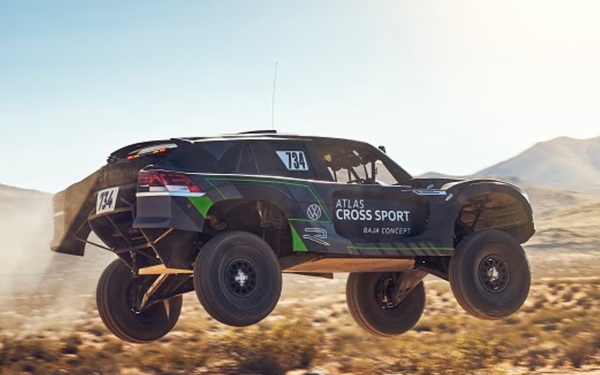 LOS ANGELES — Several automakers touted their racing programs and their link to performance in street-legal cars during the media days at Automobility LA, the Los Angeles auto show.

Volkswagen will return to the Baja 100 off-road race next year, entering an Atlas Cross Sport R race truck in Class 7 Open Production Unlimited. Unveiled today at the show, the prototype race truck is the vehicle that will compete in the Score Baja 1000 next November.

“Racing as a sport has historically been limited to a very privileged group,” said Saad Chehab, senior vice president, VW brand marketing. “However, Volkswagens competed at the very beginning of Baja racing, and we’re excited to help keep the fun, youthful spirit of the competition alive by way of our Atlas Cross Sport R.”

In 2012, Hyundai began project RM to develop and connect new high-performance motorsports technologies with future N models. Since the initiation of project RM and via evolution of the RM series (RM14, RM15 and RM16), RM models underwent extensive road testing to validate newly developed technologies, observe their effects on performance, and improve them for subsequent application on future N models for consumers.

“The RM platform is a versatile engineering testbed, allowing effective evaluation of various powertrains and performance levels, all on normal roads and environments,” said Albert Biermann, head of global research and development for Hyundai Motor Company.

Acura put performance center stage at the show with a celebration of its dominant 2019 IMSA racing season, including a gathering of championship racers from Acura Team Penske and Meyer Shank Racing, and a display that will include examples of the championship-winning ARX-05 Daytona Prototype and NSX GT3 Evo and race cars.

The show will also mark the debut of the new 2020 MDX PMC Edition, the second model in Acura's lineup to get the handcrafted "PMC Treatment" at the company's Performance Manufacturing Center in Ohio.

BMW’s Mini brand unveiled a racing-inspired vehicle, the Mini John Cooper Works GP. It is the fastest model of the the British brand that has ever been approved for street road use, according to the automaker.

The vehicle goes from zero to 100 km/h in 5.2 seconds. It will be produced in a limited edition of 3,000 units at the Mini plant in Oxford. Delivery to racing enthusiasts begins in March 2020.