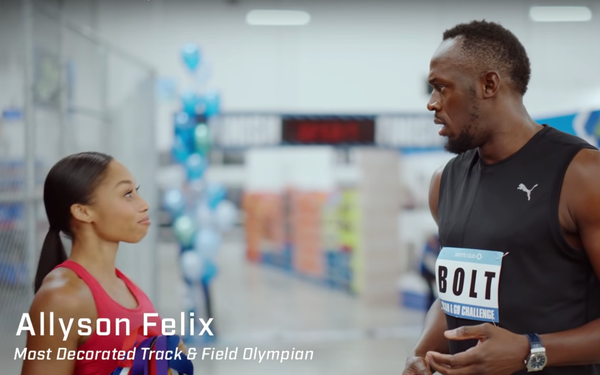 Warehouse clubs may not be known as the speediest place to shop, but Sam’s Club thinks the world’s fastest man -- retired world-record sprinter Usain Bolt -- may change that perception.

Sam’s Club has been expanding its Scan & Go technology in stores, and saw that once people tried it, they loved it. So to boost awareness for the proprietary technology, the Walmart-owned retailer is rolling out a fun video campaign aimed at turning Bolt into the world’s fastest shopper.

“We do a lot with Net Promoter Scores, and nothing scores as high for us as Scan & Go,” says Tony Rogers, senior vice president and chief member officer for Sam’s Club. The feature allows members to skip checkout lines by scanning items and paying via smartphone. It’s fast and convenient, Rogers says.

“So we challenged Mono, an agency I’d worked with while at Walmart, to come up with a concept that felt larger than life. And who personifies speed better than Usain Bolt?”

The campaign tasks Bolt with the challenge of finding and scanning 20 items in under three minutes. But it also gives him some real competition, with Allyson Felix -- 12-time world championship gold medalist -- arriving on the scene. “Hold my medals,” she says. “Reset the clock.”

Rogers says Sam’s Club will “put some muscle behind the campaign over the next month or two,” with ads appearing on a wide array of traditional and digital channels. Those include Hulu, Facebook and Instagram, as well as TV integrations with “Jimmy Kimmel Live” and “The Ellen Show.”

Rogers tells Marketing Daily that the goal, of course, is to increase usage of Scan & Go. The company also wants to convey the bigger story of its digital prowess. “There’s a real tech vibe in this company, and it’s powerful. So we’re looking for more ways to talk about it.”

While its much-bigger parent often overshadows Sam’s, it’s a retail giant in its own right, with 600 clubs in the U.S. and Puerto Rico. In its most recent quarterly results, it registered same-store sales gains of just under 1%, the small size of which the company attributed to its ongoing de-emphasis of tobacco products.