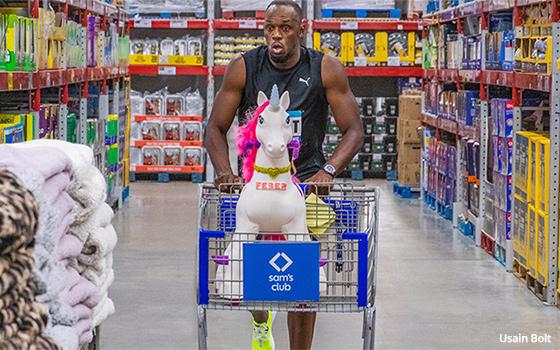 The creative, developed by Mono, highlights the company’s mobile-checkout scanning technology by following Bolt as he dashes in and out of the store. Felix pops up to jokingly mention to Bolt that she recently surpassed Bolt as the holder of the most world championship gold medals.

“In trying to showcase the speed of the technology, it was an obvious choice to feature Usain. He's the fastest human alive and one of the greatest Olympians ever,” says Chris Lange, founder/Chief Creative Officer, Mono. “But when Allyson smashed his gold medal record in late September, we wanted to bring her into the concept and move at the speed of culture. They shared an awesome competitive and lighthearted chemistry with each other at Sam’s Club.”

The video appears on the brand’s microsite and is supported with digital ads, social media, and paid integrations.

This campaign represents an expansion of the relationship between Sam Club parent company Walmart and the Minneapolis-based Mono. The agency has been working with Walmart since 2016, serving as their creative agency of record for grocery along with various other brand work, but Sam's Club was officially added to its roster in March 2019.