TV And The Bear: Fur Flies On Ursine Competition Show 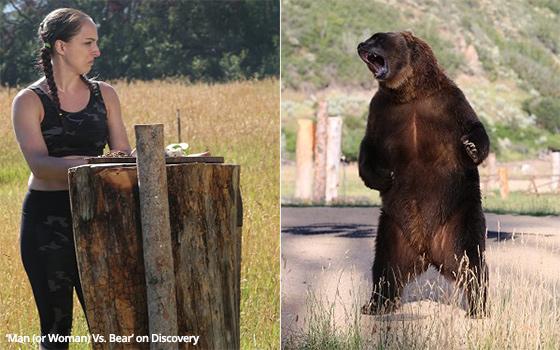 And since these grizzlies are so much larger and stronger than their human adversaries, the brutes are well-positioned to win these faceoffs, which include tug-of-war, a barrel-rolling contest and other feats.

Discovery says these activities are adapted from behaviors these bears would use naturally in the wild. Moreover, says Discovery, it is healthy for the bears -- which were raised on this sanctuary after being rescued in the wild -- to engage in these contests in order to keep them active.

A look at the premiere episode of “Man Vs. Bear” provided by Discovery indicates that the bears were neither harmed nor exploited in the making of this show. In other words, they are not reduced to the level of circus bears riding unicycles and twirling parasols.

The show hints at the potential danger to the show's human contestants posed by the close proximity of these giant bears, but while watching the show, you get the feeling that neither bear nor man nor woman were ever really in peril here.

The contestants seem uniformly in awe of these bears and their rope-tugging and barrel-rolling prowess. Indeed, bears on TV have a long and honored history.

The “Bear” of “B.J. and the Bear” was not a bear either. He was a chimp named Bear. Bear Grylls is not a bear, but also a man. Bear Bryant was also a man whose grim-faced steadfastness on the sidelines of the University of Alabama football teams he coached enlivened many a fall Saturday afternoon of TV from the ’60s through the ’70s.

Speaking of football, “Da Bears!” became a popular catchphrase on a series of “Saturday Night Live” sketches that poked fun at Chicago Bears fans. The Chicago Bears were seen just this past Sunday on Fox defeating the New York Giants.

Another TV bear from many of our television youths was the unforgettable Dancing Bear of “Captain Kangaroo.” Even the tiniest tots watching that show were capable of understanding that Dancing Bear was really just a guy in a costume. And yet, who didn’t love Dancing Bear?

Yogi Bear -- named for Yankee great Yogi Berra -- was easy to love too. So was another cartoon bear named Smokey. Associated Press style alert: This beloved figure is always identified in story copy as Smokey Bear, not Smokey the Bear, and also not “Smoky.” I looked it up.

None of the three bears featured in “Man Vs. Bear” are named Smokey, Yogi, Ben or Dancing Bear -- any one of which would have been nice.

Instead, they are Bart, Honey Bump and Tank: Three new bear names to be added to TV's long pantheon of beloved bears. And remember: Only YOU can prevent forest fires.