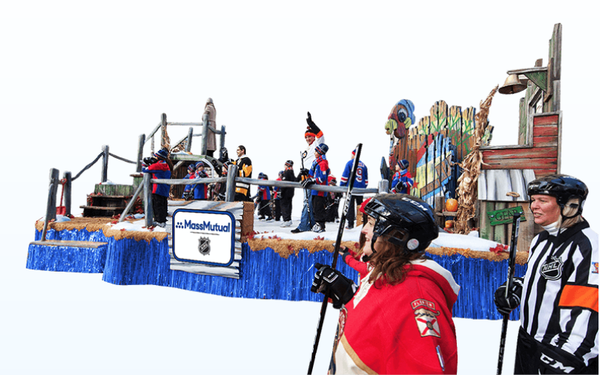 MassMutual is extending its relationship with the National Hockey League with fresh ad creative and a float in the Macy’s Thanksgiving Day Parade.

“First Goals” is a 30-second spot highlighting NHL players’ first NHL goals, and the emotional responses of the people who helped the players fulfill those goals. It was created by MassMutual’s creative AOR, Johannes Leonardo.

The film, debuting Nov. 27, is a continuation of the narrative for the “Greater Than One” campaign spotlighting MassMutual’s values of partnership and community.  It will run on NBC, NBC Sports, NHL Network, and NHL and MassMutual digital and social media channels.

During the Macy’s Thanksgiving Day Parade, MassMutual will sponsor the NHL’s float, with kids testing their slap shot skills against a giant turkey goalie. Escorting them down the route will be the honorees of this year's Most Valuable Hockey Mom contest, sponsored by MassMutual.

NHL alumni Ed Olczyk and Dominic Moore will be on the float, with The Black Eyed Peas performing, The NHL will provide live coverage of the float through Instagram Stories.

Other additions to the campaign include a program called “FutureSmart,” which promotes financial literacy by engaging fans across NHL digital and social channels as well as through on-site activation at tentpole events, with opportunities to win prizes.

MassMutual and the NHL embarked on a partnership at the beginning of last year’s Stanley Cup Playoffs, when MassMutual became the official life insurance and retirement planning partner of the NHL.