EOS Taps TikTok Creators For The Holidays... Plus, Some TiKTok Tips 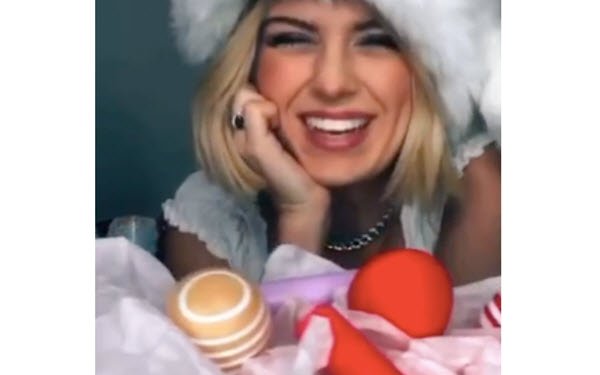 Having killed it with its first TikTok campaign in September, EOS is back with a second campaign on the platform for the holidays.

The new campaign, created with Collab — which will launch on November 30 and continue through December 7 — consists of original TikTok videos by more than 20 well-known “creators” on the platform.

The holiday-themed videos share one key element: Each creator is initially shown giving an #AwesomeKiss after applying EOS lip balm.

In some cases the kiss is planted on the camera, while in others it’s bestowed on a friend — sometimes using TikTok’s duet feature, which lets users simultaneously view two videos side-by-side in the app. Once the kiss takes place, each creator goes into full holiday mode, employing elements like holiday sweaters, lights, and mistletoe.

The large, varied group of creators this time around includes Sterling Meyers (@sterlingmonett), shown above, known for fashion; TikTok dancing queen @Sarati; couple Chris and Sharla (@OurFire), who share the latest jokes and trends; face-painting and makeup phenom @benjikrol; and @charlidamelio, who grew her TikTok account from 400,000 to 5 million in a single month with her dancing and lip-syncing content.

TikTok has proven to be a natural platform for EOS -- which has become a go-to beauty brand for teens and young women since its launch more than a decade ago. (According to Statista, the brand had a 7% share of U.S. lip balm sales in 2018.)

“As an innovation-driven brand, we’re always on the lookout for new ways to reach and engage with our consumers,” CMO Soyoung Kang tells Video Insider. “We had been exploring TikTok since late 2018, and we knew that we wanted to launch a major campaign on the platform as part of our global brand campaign, ‘Make It Awesome.’

“Not only is the platform a great match for our core target audience; over the last year, the TikTok team has really enhanced and expanded their offerings for brand partnerships, which made our decision even easier,” she continues.

“Our inaugural TikTok campaign ran for most of September, and was comprised of multiple elements to maximize our learnings of what works and doesn’t work on the platform. Our campaign included a hashtag challenge — #MakeItAwesome — a TikTok creator activation, in-feed ads, a branded shoppable microsite, TopView (a full-screen branded video takeover), and Super Like, which provides a more interactive experience using customizable, branded ‘like’ icons.” (You can check out videos from that campaign here.)

That campaign was “a huge success,” Kang reports. “We created one of the most successful sponsored hashtag challenges, with over 4 billion video views and extremely high double-digit engagement rates versus other platforms.”

While EOS is still processing the metrics of this new platform to calibrate the results against other platforms, “even within the TikTok ecosystem, our #MakeItAwesome campaign has well exceeded their benchmarks,” she says. “In addition, an independent brand study confirmed that the campaign resulted in almost 3x the recall among our TikTok audience versus the control.”

No surprise then, that EOS was hyped about using TikTok again.

“We moved quickly to continue our presence on the platform, especially since our brand engagement is already exceptionally high during the holidays,” Kang says.

“The learnings from our first campaign enabled the team to optimize our approach for #AwesomeKiss, and to lean into the components that were best aligned with our holiday strategy.”

That meant quadrupling the number of creators used (there were just five in the first campaign, some of whom are back for this one), with a focus on creating and boosting TikTok-native content.

EOS is eager to see how the results from pumping up the endemic content will differ from those of the first campaign (on which EOS worked with Mekanism), Kang says.

With so many brands curious about and interested in experimenting with TikTok, I also asked Collab — which guided the brand in developing the creative and media strategy for this second TikTok campaign — for some tips about optimizing campaigns on the platform.

For context: Collab represents several hundred creators on YouTube, Instagram and Twitch, as well as TikTok. According to Comscore, Collab is regularly the No. 9 or No. 10 most-watched network on YouTube, with an average of more than 8 billion views per month across platforms. It has an average monthly U.S. audience of more than 70 million people across its channels.

The company, which earlier this year added an ad sales unit, has developed and implemented successful TikTok campaigns for Chipotle (“The Lid Flip Hashtag Challenge”), among others.

* It's an idea-based platform, so building a strategy and concepts that align with how TikTok works, and then taking into account brand goals, is central to  success on the platform.

* Best practice involves learning to use TikTok official platform media products and platform talent together. The media provide the scale, and the talent translates that scale into users’ interests, driving participation.

* Collab has seen excellent engagement and overall results using TikTok's in-feed media and hashtag challenges. Some clients have been able to generate a billion views in a six-day flight by using this approach.

* Using a call to action in TikTok’s in-feed media product has also been particularly effective.