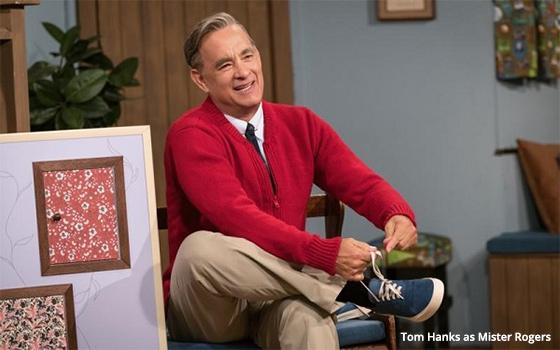 With the release of the Tom Hanks-Mister Rogers movie “A Beautiful Day in the Neighborhood” last week (photo above), the TV Blog presents this adaptation of a piece of writing from a few years back on the legacy of Fred Rogers and his show, “Mister Rogers’ Neighborhood.” Happy Thanksgiving Weekend, everybody.

Few people are aware of this, but television has a patron saint.

He chose her on the basis of a story that is repeatedly told about her -- about the time she was too ill to attend a midnight mass on Christmas Eve, but later reported that she didn’t miss the service because she was able to see and hear it on the wall she faced from her sickbed.

TV had another saint too. His name was Fred Rogers. He was the last and perhaps the first of his kind, a TV personality like few others, or possibly no others, a man for whom “the space between the television set” and the small children who watched him was “holy ground.”

When he announced his pending retirement in August 2001 -- bringing the curtain down on the iconic children’s show he had produced and starred in since 1968 -- I wrote then that this soft-spoken, ordained Presbyterian minister in a zippered cardigan and tennis shoes was nothing less than “the Gandhi of television.”

I had never met him, for he was based in Pittsburgh, a city that journalists on the TV beat rarely visit, where his show, “Mister Rogers’ Neighborhood,” originated from the studios of a public television station (WQED).

But he appeared on ABC’s “Nightline” sometime during that month and I was deeply moved by what he said.

His statements about television and its capabilities and promise, its potential to “nourish the human family” were so rare and unusual that they may as well have been uttered by a Martian who had just arrived with no understanding of the planet Earth.

“Those of us who are the producers and purveyors of television are servants of the people,” Mister Rogers said on “Nightline.”

“And if those who sponsor programs and those who sit on boards of directors of [companies] that own networks, if they would simply watch what’s on their air and say to themselves, 'Do I want my family watching this?' I think that the climate would change and the landscape of television could be what it’s meant to be, and that is a landscape of nourishment for the human family.”

“A landscape of nourishment for the human family?” I wrote incredulously on Aug. 28, 2001. “When was the last time you heard words like that coming from someone in the TV business? Probably never.”

I had been covering the TV business as a journalist since 1983 and I had never heard anything like them from anyone.

"But that's Fred Rogers for you," I wrote. "Here’s a guy who, after more than 45 years in the TV business, still unabashedly refers to the space between TV screen and child as nothing less than ‘holy ground’ and considers TV’s capacity for performing miracles a 'mysterious wonder'."

He explained it all that night on "Nightline." "I had a letter the other day saying this woman had been abused and raped as a young child," he told his "Nightline" interviewer, John Donvan.

"And she said, 'I really believed it when you said that people could like me exactly as I was, because I really didn't like myself that much at first. But I really came to believe you.'

"Well, to me," Mister Rogers said, "that's a holy enterprise. The space between the television set and that little girl who was in such desperate need -- the space there was holy ground. Something was happening that wasn't in my control. I was just saying what was in my heart, and she -- between that moment and her receiving it -- was, I think, a mysterious wonder."

The following June, I conducted a brief phone interview with Mister Rogers, who was then 74 -- the only time I ever spoke with him.

It was a day or two after he delivered a commencement address at Dartmouth College, and I wanted to know how it went because, in the days before the event, some Dartmouth students expressed dismay that the host of a TV kiddie show had been invited to speak at their commencement.

“It's like Barney the Dinosaur speaking at our graduation,” one student complained to the Associated Press. Said another, “I had hoped for someone more awe-evoking -- some secretary of the U.N., or [former New York Mayor Rudy] Giuliani, or a human rights leader.”

“A U.N. secretary?” I asked in a column dated June 11, 2002. “A human rights leader? Get to be my age and you'll no longer be so awestruck by folks like these. But Mister Rogers? I’ll take him over Kofi Annan every time.”

As it happened, no one booed Mister Rogers. “We had a good time at Dartmouth,” he told me on the phone from Pittsburgh. “And when [the students] sat down, there was this very loud man's voice from over on the left. It said, ‘We love you, Mister Rogers!’ I was so touched by that.”

His commencement speech bordered on the poetic. “Our world hangs like a magnificent jewel in the vastness of space,” this TV kiddie show host told 1,101 Dartmouth graduates in Hanover, N.H., that Sunday in June, as he accepted his 40th honorary degree -- Doctor of Humane Letters.

“So in all that you do, in all of your life, I wish you the strength and the grace to make those choices which will allow you and your neighbor to become the best of whoever you are,” he said.

Naturally, Mister Rogers held no grudge against the students who complained about his coming. “I would have loved to have been able to meet with them and talk with them,” he said on the phone in a voice filled with joy.

Mister Rogers, it turned out, did not have long to live. He died the following February, in 2003, after a battle with stomach cancer.

“I have really never considered myself a TV star,” Fred Rogers once said. “I always thought I was a neighbor who just came in for a visit.”