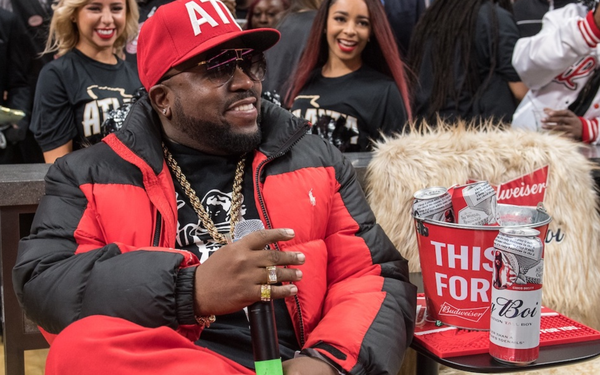 It may be the most clever — or most convoluted — marketing promotion out there these days.

Budweiser is giving away two Atlanta Hawks courtside seats that actually belong to Atlanta rapper Big Boi. The twist is, if Big Boi actually shows up at a game, the winner has to scram.

It’s worth noting that Big Boi’s seats aren’t just seats. They’re pretty great seats behind one of the baskets, and adorned with a special fuzzy shag-rug-type backing emblazoned with Big Boi’s name.

So it’s hard to miss them.

Budweiser and the Hawks have been giving away the seats to some games, to consumers who are getting their Bud from the new limited edition Big Boi Tall Boy cans that were introduced in October.

It’s even more fun, apparently, when Big Boi actually attends a game, as he did Nov. 20, and had to kick out the two interlopers who had his seats. (They were relocated, of course.)

After all, how many people get caught poaching good seats rightfully owned by a celebrity, in full view of thousands of fans? And don’t get pummeled by security? (We couldn’t locate any statistics on that.)

“Brands are always challenging us to deliver things to our customers that you can’t buy — and that’s what this is,” according to Andrew Saltzman, the team’s chief revenue officer, quoted on  FrontOfficeSports.com.

The special Big Boi Tall Boy cans hold 25 ounces, but instead of using the familiar Budweiser logo, these read Big Boi in the same script style. Instead of “King of Beers” proclaimed on the typical Budweiser can, Big Boi’s label reads, “Cooler Than A Polar Bear’s Toenails.”

“Wherever my career has led me since I started out almost 25 years ago, I’ve always stayed true to Atlanta and proudly repped the city each step of the way,” the performer said earlier this month. “Budweiser and I are bringing the Budweiser Big Boi Tall Boys here to thank the city and the fans who have supported me since the beginning.”

Budweiser, Anheuser-Busch InBev’s best-known American beer brand, also announced it’s become the official domestic beer of the NBA’s Brooklyn Nets, and on special logos, will move a traditional Budweiser crown over the B in the beer’s name, which is says is a tribute to the late rapper and Brooklyn native Biggie Smalls.

The Nets deal paves the way for other tie-ins with Barclay Center, where the team plays.

Rapper Jay Z, who has had a close association with Bud, owned a stake in the Nets but sold it in 2013, when he decided to try his hand at being a sports agent. The ownership stake would have made that against league rules.