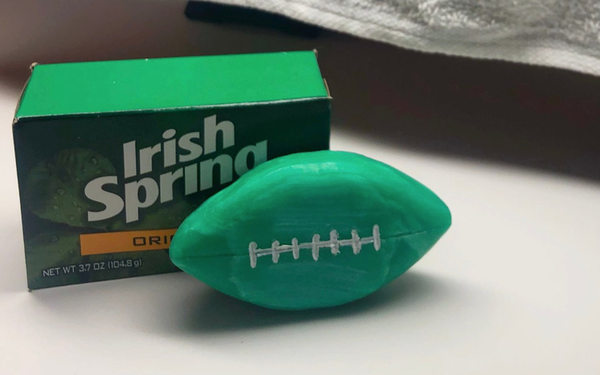 Irish Spring is offering a tongue-in-cheek solution to fierce college football rivalries (which will come to a head this Saturday).

The Colgate-Palmolive brand is offering the "Irish Spring Neutral Zone." The brand pop-ups will be held during tailgates for the big games in Ann Arbor, Michigan; Auburn, Alabama; and Gainesville, Florida.

At the Neutral Zone, fans will have an opportunity to belt out classic karaoke tunes with a chance to win Irish Spring products and giveaways.

But there's a twist. Opposing fans will need to set aside their differences and join forces by standing on "soapboxes" decorated in their school colors and sing a synchronized duet to promote good sportsmanship.

Tailgaters will be able to cheer on their friends, play cornhole and have some "Good Clean Fun" ahead of the game.

This isn't Irish Spring's first attempt to make peace among rival teams. After a local Georgia supermarket pulled Irish Spring products from its shelves ahead of University of Georgia's matchup with Notre Dame in September, the company brought its own supply of soap down to Georgia to make sure Athens was stocked up for a good, clean game between the opponents.