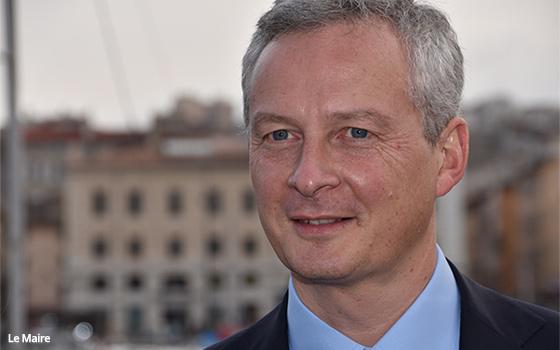 The Trump administration on Monday proposed tariffs of up to 100% against $2.4 billion of French imports such as champagne and cheese, suggesting that France’s digital-services tax unfairly targets U.S. tech companies such as Apple, Amazon, Facebook, and Google.

U.S. Trade Representative Robert Lighthizer in a statement said the move should send “a clear signal that the United States will take action against digital tax regimes that discriminate or otherwise impose undue burdens on U.S. companies.”

French Finance Minister Bruno Le Maire said the European Union would strike back against the U.S. if President Trump follows through on a plan to impose tariffs on French imports.

“They are now telling us that they don’t want this solution and are simply going to impose new sanctions on France,” Le Maire said on a radio broadcast. “My message is clear: We will never, never, never abandon our will to tax fairly tech giants,” he added.

The WSJ estimates that the $2.4 billion in imports threatened with tariffs is slightly less than 5% of the $52 billion worth of goods imported from France in 2018.

France and Google have been at odds in 2019, after the country began requiring the tech giant to pay a “link tax” -- a license to display snippets of information in Google News.

Google decided to remove the short preview of the news article in search query results and only serve up the headline and link, so it would not need to pay a tax.

The link tax would be applied to snippets and previews of articles from publishers that appear in Google News.

Google insists that the company provides value to publishers by serving up the snippets in search results, so readers can discover the content and have a direct link to their sites.