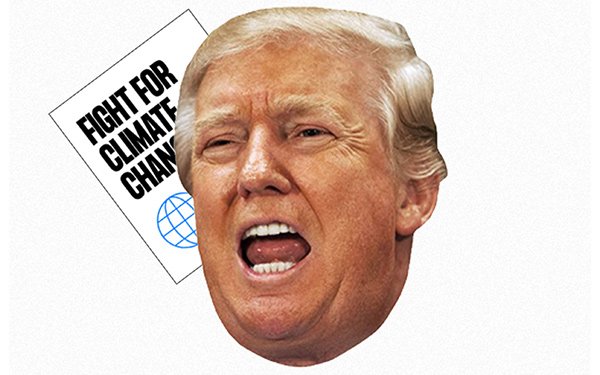 A group of agency creatives are lending their talents anonymously to introduce a climate change awareness campaign. The stated aim is to get President Trump to reverse his decision to formally withdraw from the 2015 Paris Agreement on combating climate change.

The "Trump Only Listens to Trump" initiative encourages Twitter users to send recordings of President Trump's own voice—with his words rearranged a bit to reflect pro-environment messages--to his official Twitter account.

"Climate change. This is the new reality we face. Believe me!" is one of 15 messages available at the dedicated “Trump Only Listens to Trump” website that is designed to easily sync with Twitter. When a visitor clicks on the site to send a soundbite directly to Trump, his official account will receive the message: "Hey @realdonaldtrump it’s time to talk Climate Change. And we’ll let someone you know pretty well do the talking. #TrumpOnlyListensToTrump #ClimateStrike Via trumponlylistenstotrump.com."

The group behind the campaign cites two reasons for its wish to remain anonymous. It claims  to be a "group of creatives who work for agencies that are not comfortable with us taking a political stance on climate change." A statement from the group suggests that the writer (at least) is British given phrases like, "such is our fervour around the climate emergency, coupled with our love of a cheeky idea, we want to do our bit." (Of course that could be a ruse to throw people off track).

Certainly some agencies have shown a willingness to express views on the subject openly. In September, many of the industry's top leaders, including David Droga, DAN's Nick Brien and DDB's Wendy Clark, signed a pledge to help support and develop climate change advocacy campaigns. (Here is a link of supporters: https://www. thefutureiscalling.com).

The anonymous group also says it is "not seeking personal fame." Its "only wish" is "fame for the site." This group wants as many people as possible to use these clips of "eco-warrior Trump" to tweet the POTUS and make him act.