President Amps Up Disparaging Tweets As Impeachment Heats Up 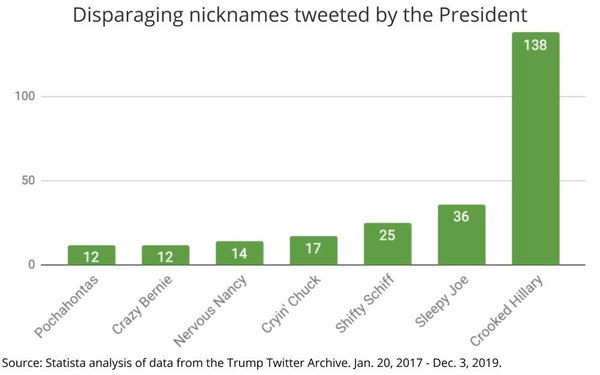 On the heels of disparaging nicknames used for other world leaders at this year's NATO summit, as well as House Intelligence Committee Chairman Adam Schiff, by the President in the past several days, Statista has released a quantitative analysis of the Trump Twitter Archive showing that "Crooked Hillary" was by far his most-tweeted insult over the past two years, followed by "Sleepy Joe," "Shifty Schiff," "Cryin' Chuck," and Nervous Nancy."

The President's @realDonaldTrump Twitter account has 67.2 million followers, and his tweets are routinely picked up and covered by major media outlets, amplifying the reach of each tweet.