'The Information' Debuts News App For $30 A Year 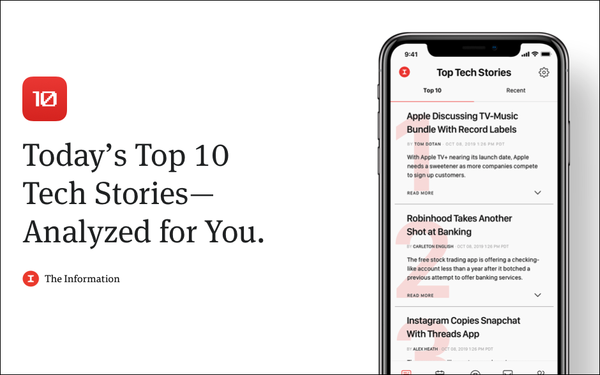 A subscription to the tech industry-focused site and newsletter The Informationcosts about $400 a year.

Now, a new mobile app — released to coincide with The Information's sixth birthday — will target consumers, with summaries of the 10 most important tech news stories of the day for $29.99 a year.

Called the "Tech Top 10," the app is available for iOS and Android.

"It’s designed for consumers who want to be plugged into the big tech stories without searching through Twitter or watered-down general news sites," Jessica Lessin, The Information’s founder-CEO, wrote in a post announcing the launch of the app.

"Six years ago, the biggest problem in tech news was a lack of good journalism about tech companies. The coverage was mostly hype and clickbait," Lessin tweeted today.

"Now the industry has another problem. Tech news has become SO important to the lives of everyone, not just business professionals. But the choices for following it — really following it — are tough..." she added.

Each top 10 story in the app has links to the full article, which The Information's subscribers can access. The app is free for existing subscribers.
The new app is similar to The Information's "Briefing" newsletter to subscribers, which summarizes and analyzes the day’s tech stories.
"Tech Top 10" is "powered by our newsroom of experienced editors and reporters, not algorithms," according to Lessin.

As of April 2019, around 300,000 were getting The Information's weekly newsletter, and the publication says "tens of thousands" are now paying subscribers — mostly executives in the tech industry.