Just In Time For Christmas: Celebrities Acting Like Real People 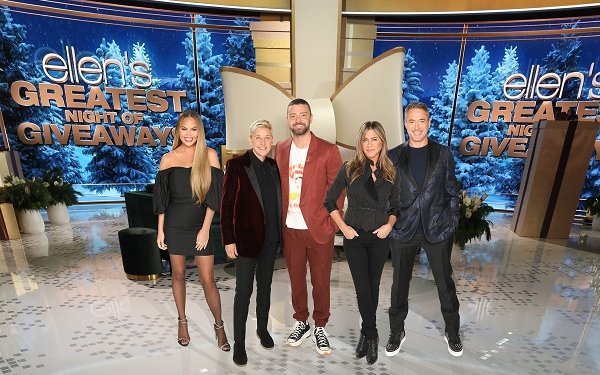 If you're like me, then you have never heard a knock on the door and then found a celebrity standing on your doorstep.

The same goes for Publishers Clearinghouse too. I have never seen them, either at my own door nor anyone else's.

But in a three-night gift-giving stunt on NBC this week, Ellen DeGeneres and other celebrities intend to surprise various regular people with heartwarming Christmas gifts at their homes and workplaces.

The nature of these gifts is not revealed in the press material NBC is providing in support of this show, which has been titled “Ellen's Greatest Night of Giveaways.”

Nor were any episodes provided for preview. What these people will receive from the likes of Michelle Obama and Jennifer Aniston is anybody's guess.

It is an interesting title to bestow upon a series comprising three consecutive evenings (Tuesday, Wednesday and Thursday, 8-9 p.m. Eastern).

Shouldn't the title be “Greatest Nights,” plural? Otherwise, we are left to wonder which of the three nights is the “Greatest.” Oh, never mind.

Nor was it possible to determine from an NBC press release which celebrity friends of Ellen's (supposedly) would appear on which night.

What if I really have a need to schedule my life around the episode featuring Chrissy Teigen, for example, since I simply cannot get enough of her? I am out of luck, apparently.

Others who you might encounter on any one of these three nights giving gifts to people other than you or anyone you know include Steph and Ayesha Curry, Jason Momoa, Justin Timberlake, Robert Downey Jr. and more.

Ellen DeGeneres’ ability to form so many close, meaningful friendships with celebrities representing the full spectrum of celebrity-dom -- from Melissa McCarthy to Michael B. Jordan -- is truly a marvelous thing to see.

How does she do it? She is so busy -- and yet, she can still make time for Michelle Obama and Chrissy Teigen.

All of which begs another question: How would you react if you opened your door and Melissa McCarthy was standing there with a sack of Christmas gifts?

The fact is, most people left to their own devices in their own homes, out of sight of the neighbors, are rarely “camera-ready” in case of a surprise celebrity pop-in.

Years ago, Jay Leno had a recurring bit on “The Tonight Show” in which he repeatedly visited an apartment house in Burbank, whose rental units seemed populated mainly by eccentric show business wannabes.

Ready or not, Jay always found people willing to go before the cameras to participate in whatever he asked them to do, no matter what their state of dress or undress.

Of course, more than most celebrities, Leno had long cultivated an Everyman image that somehow made him relatable to ordinary people -- despite his extreme fame and wealth.

It is not easy to envision Jennifer Aniston, Michelle Obama or Justin Timberlake relating to non-celebrities, even with Ellen DeGeneres there to help them.

I will admit that if Jason Momoa suddenly turned up at my door, I am pretty sure I would look at my watch and say, “How long do you think this is going to take?”