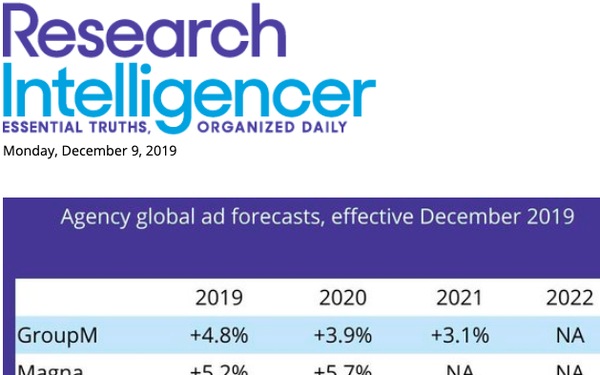 The global ad economy will expand 4.5% in 2020, according to a consensus estimate of Madison Avenue's leading ad forecasters calculated by Research Intelligencer.

The analysis, which is based on updates being released today by three major agency holding company forecasts WPP's GroupM, IPG Mediabrands' Magna, and Publicis Media's Zenith -- being released this morning, as well as Dentsu Aegis Network's last update in June.

While the absolute projections of individual agency outlooks vary from a low of +3.9% to a high of +5.7% for next year, the consensus generally is that 2019 ended better than many expected, but the world's global ad expansion is slowing down and will trail overall economic growth for the foreseeable future.