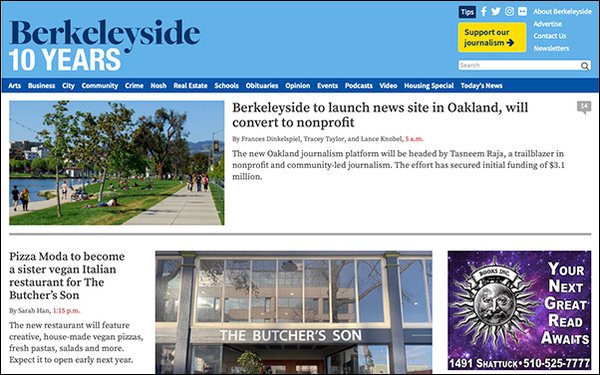 Berkeleysidewill receive initial funding of $1.56 million from the GNI.

GNI’s funding supports the creation of a sustainable business model by providing financial backing and technical and product expertise. Each collaboration is set up with the intention of providing lessons learned in other local newsrooms.

Berkeleyside has also been chosen by the American Journalism Project (AJP), a new venture philanthropy organization, to receive $1.56 million in funding, intended for business, technology and fundraising. The AJP handed out 11 grants in 10 states today.

With the funding, Berkeleyside, which is converting to a nonprofit organization to support and deliver civic-minded local reporting, will launch a new journalism platform in Oakland to be lead by Tasneem Raja. She has served as a senior editor at both NPR and Mother Jones. Raja will lead a team of editorial staffers already working with the community to tap into core issues.

The site is unnamed at present; it will launch in spring 2020.

“These are organizations that have entrepreneurial leadership and strong community buy-in. We’re looking for opportunities to change the trajectory of nonprofit news organizations themselves by providing the capital and capacity they’ve lacked, particularly on the fundraising side,” Jason Alcorn, managing director of strategy-operations at the AJP told Publishers Daily.

“Success will come when we’ve helped communities understand that local news is a public good. These are civic institutions and need to be funded and supported as such,” he added.

“We’ve been talking with a wide range of Oakland residents about how journalism in Oakland can be useful in their lives, their work and their communities,” Raja stated. “From what beats to cover to the lens of our reporting, our goal is to design and build our platform in partnership with the people of Oakland.”

Alcorn said: “The opportunity with Berkeleyside is to take a model that’s trusted in the community and that has a good track record of leadership and ask: What can this look like with more support? How do we build on this model and begin to serve in other communities?

The GNI’s Local Experiments Project has also partnered with McClatchy in the U.S. and Archant in the U.K. Google has no input on editorial coverage at its partner sites.