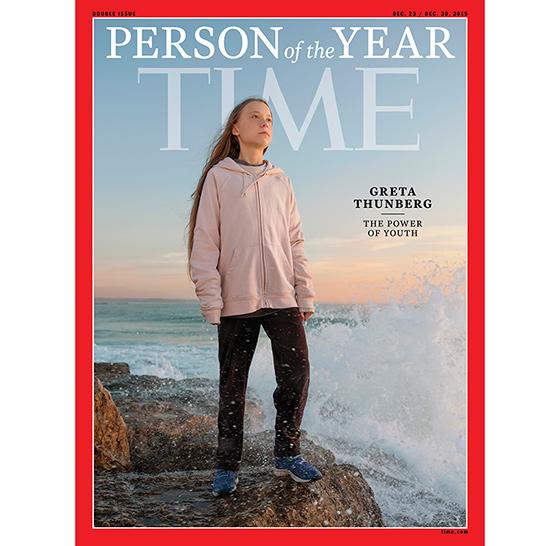 Time's special "Person of the Year" double issue hits newsstands this Friday. Thunberg is the youngest person to be given that title since the franchise began in 1927.

“Over the course of little more than a year, a 16-year-old from Stockholm went from a solitary protest on the cobblestones outside her country’s Parliament to leading a worldwide youth movement,” Time editor-in-chief-CEO Edward Felsenthal wrote in a note to readers.

For the first time, Time also recognized influential people in a few new categories, like business, entertainment and sports.

“We are also expanding 'Person of the Year' to reflect the full range of subjects that Time covers,” Felsenthal wrote.

Time was a magazine founded “to cover everything of consequence,” executive editor Ben Goldberger, who oversees "Person of the Year," told Publishers Daily.

Disney CEO Bob Iger is “Businessperson of the Year.”

“Entertainer of the Year” is singer Lizzo, who was nominated for eight Grammys this year.

The “Guardians of the Year” are public servants, specifically those that “provided the foundation for the articles of impeachment” against President Trump.

The process of choosing “Person of the Year” starts “in earnest” in September, Goldberger said. The entire Time team comes together — from “veteran foreign correspondents to copy editors” — to suggest potential candidates. Then, editorial projects are launched to focus on those groups, concepts and individuals.

The “Person of the Year” is ultimately chosen by Felsenthal.

“We aim to pick a choice that best reflects not just the events of the year, but the larger historical currents of the moment,” Goldberger said.

“Despite the dire urgency of her message, there is optimism at the heart of this year’s choice,” Goldberger stated in an article about Thunberg. “To a generation let down by traditional power structures, Thunberg’s selection shows you don’t need to be part of them to shape history.”