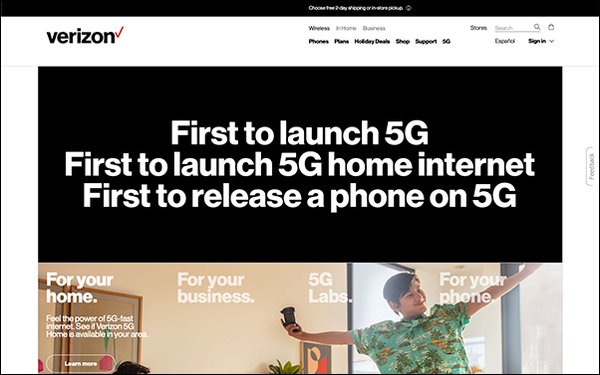 Changing course, an ad industry watchdog has given its qualified blessing to Verizon television ads that boast of being the first network to offer ultrafast 5G service.

In an opinion issued this week, the Better Business Bureau's National Advertising Division says Verizon offered proof that it rolled out 5G service in areas of Chicago and Minneapolis on April 3 of this year -- making it the first carrier to offer 5G to consumers.

“A small launch can support a 'first' claim,” the watchdog writes. “In parts of the downtown areas of certain cities, Verizon customers could get the blazing fast speeds that are the focus of 5G publicity.”

But the National Advertising Division recommended that Verizon make some modifications, including that it add a disclaimer that its 5G service is “more unavailable than available.

Earlier this year, the same watchdog issued an opinion recommending that Verizon stop boasting about being the first carrier to offer 5G service. That prior opinion was issued in March, before Verizon's mobile 5G network was available. Verizon initially said it was going to appeal that opinion, but instead asked the National Advertising Division to re-open the prior case.

The new decision came in response to a challenge to AT&T's challenge to four Verizon ads. (AT&T has itself faced challenges to ads that use the phrase “5G Evolution.”)

While the watchdog largely rejected AT&T's arguments, the group recommended that Verizon revise one of the challenged spots. That ad, “Beyond Speed: Real Time,” briefly showed students playing video games on mobile devices while a voiceover said, “play console-quality multiplayer games on the go.”

The National Advertising Division said Verizon should not convey that its 5G service can be used to play games on a bus.

“The evidence suggests that Verizon’s 5G service drops out suddenly... and there was no evidence that a passenger on a school bus would retain a 5G connection for a sufficient amount of time to complete a 'console-quality multiplayer game on the go,'” the group wrote.

“Although Verizon’s 5G service will improve steadily through increased network deployments and better technology, the record in this case does not support the message reasonably conveyed that Verizon’s 5G service can be used to play a multiplayer game on a school bus,” the group wrote.