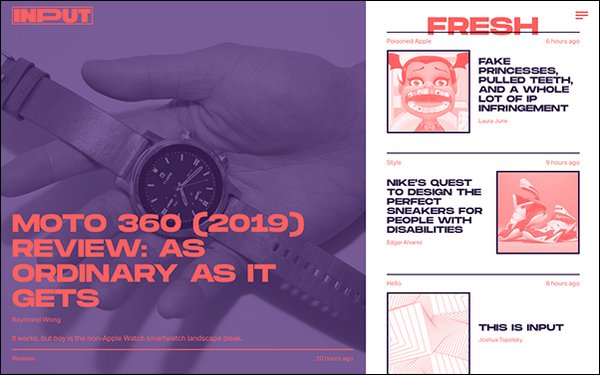 It will focus on “the intersection of tech, design, style and culture,” according to the company, which also publishes digital brands Bustle, Elite Daily and Nylon, among others.

The new site will be led by Joshua Topolsky, editor-in-chief of BDG’s Culture & Innovation portfolio, which include Inverse, Mic and The Outline.

BDG bought culture and politics site The Outline and science and entertainment site Inverse (its eighth acquisition) this year.

“Our goal with Input is to speak to a new generation of reader — people who feel technology isn’t just about devices, but something that touches every part of their lives,” stated Topolsky. “We’ve built some killer tech of our own to tell new kinds of stories, and we’re excited to push the boundaries even further, both in how we tell those stories, and the perspective they bring.”

Stories on the homepage range from “Nike's quest to design the perfect sneakers for people with disabilities” to “Surveillance AI tech is China's latest export.” There is also an article on the Bape and "Star Wars" merchandise collaboration.

“This isn’t just about phone reviews or detailing the next Twitter meltdown (we’ll do some of that too)," Topolsky wrote in a post on Input introducing the site to readers. "It’s about finding the ways technology and a life lived inside technology changes us, connects us, and moves us — and then telling you why you should care with as much honesty as possible.”

Editorial is mixed with shoppable ad sections on the site, with titles like “Buy This Stuff” and “You Need It Now.”

Jason Wagenheim, Chief Revenue Officer at BDG, believes “there’s a major gap in how other media is covering the tech industry. Not much has changed in the last 20 years,” he stated.

Input has hired staff from Mashable, Engadget and Vice. It will continue to build out its team throughout 2020, according to BDG.