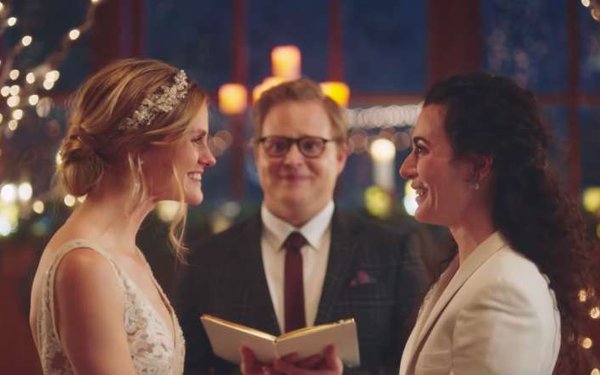 So a network pulls a TV commercial because a conservative pressure group doesn’t like two women kissing in a wedding-service TV commercial?

This is what Crown Media’s Hallmark Channel did to the wedding-service company Zola. This comes in a world where many networks have also run the spot without incident and same-sex marriages are legal in the U.S.

Hallmark Channel’s original thinking might have been: “Well, we are still running other commercials from Zola. So pulling one commercial can’t be all that bad. Right?” Wrong.

TV networks do — as they proclaimed in the past — have the right to decline advocacy commercials or TV spots that spout blatant falsehoods and lies. (Political advertising creatives, are you listening?)

Unfortunately, some TV networks might think — as Hallmark Channel originally reasoned in a statement — that anything “controversial” in a TV commercial means it deserves the heave-ho.

But what exactly was “controversial” here?

Is eating a beef hamburger versus a plant-based burger controversial? How about a real-scary horror movie trailer when children might see it? Highlighting serious-cancer issues in TV commercials — with worried patients (actors, or real-life) — can be way more disturbing. Maybe that’s controversial.

Was there a massive falsehood in any wedding-service TV commercial -- such as suggesting a license isn't needed to marry?

Democratic presidential candidate Pete Buttigieg tweeted about this: “Families are built on love — no matter what they look like.” Amen.

Hallmark and Crown Media are now looking to make amends. But this begs the question: What principles do some TV networks observe when it comes to modern-day marketers? Whatever those things are, they may not be married to them.

advertising, gay/lesbian, tv
1 comment about "A Kiss Is Just A Kiss - Even In A TV Wedding Ad".
Check to receive email when comments are posted.
Next story loading