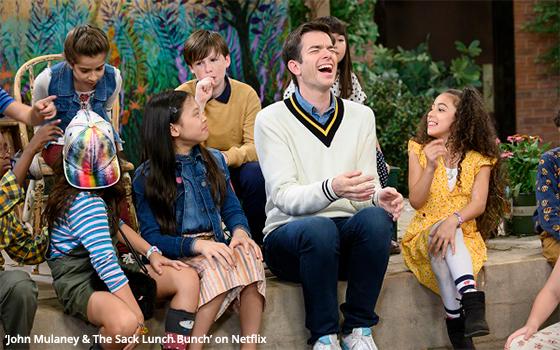 We seem to be having a children’s TV moment, even if this particular moment is characterized by kids’ shows that are not actually real.

The attention being paid to children’s TV right now is due mainly to “A Beautiful Day in the Neighborhood,” the Tom Hanks Mister Rogers movie that has garnered almost universal thumbs-up reviews.

The movie is about Fred Rogers (1928-2003) and his old PBS show “Mister Rogers’ Neighborhood,” which no longer exists, but is well-remembered with great affection by the generations who grew up with it.

And on Showtime, we are now in the midst of Season Two of the Jim Carrey series called “Kidding,” in which Carrey plays a fictional kids' TV show host named Mr. Pickles who bears various similarities to Mister Rogers.

Certainly, “Kidding” is not having nearly the impact of the Tom Hanks movie, but the Showtime series does serve to bolster the central point of this TV Blog -- namely, that this feels like a very appropriate time for a new spoof of children's TV to make its debut on Netflix.

It is called “John Mulaney & The Sack Lunch Bunch” (pictured above), and it springs, obviously, from the comic mind of stand-up comedian John Mulaney -- whose creativity at this point in his life and career (he’s 37) would appear to be in full flower.

The show -- a one-off special (not a series) debuting on Netflix next Tuesday -- is a very rich, fully realized satire of kids’ TV shows.

One of the joys of this show is that every segment veers off into directions that are wholly unpredictable. This is a very rare characteristic of satire on TV -- especially for the kind of satire that spoofs TV itself.

Children's TV spoofs are nothing new, and TV is satirized all the time on TV. Generally speaking, talk shows and TV news are the forms of TV that seem to come in for this kind of treatment most often. But kids' TV is not too far behind.

On “The Sack Lunch Bunch,” the children who surround the show's host (played by Mulaney as himself) are particularly precocious. Like some children in the real world, they tend to affect a world-weary, skeptical attitude about Mulaney and this show.

While he talks to them in a grinning, sing-song voice, they demonstrate again and again that they're not buying it. Instead, they probe his intentions and meanings with incisive questions that turn the whole concept of an “innocent” TV show for children on its head.

This show is hugely entertaining. Indeed, while the TV Blog has no idea what this show cost to make, it looks as if the financing was generous. The show contains a great variety of segments (all hilarious and highly creative) plus elaborate musical numbers.

The show’s juvenile cast is a group of very talented children, all of whom can sing and dance. Plus, they seem to fully understand what the show is spoofing, and they give just the right performances to help Mulaney put it across.

Welcome to Mister Mulaney’s neighborhood, just in time for Christmas.