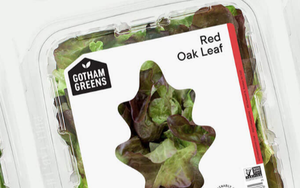 Talk about a growth industry.

East Coast indoor produce farms like Gotham Greens and Little Leaf Farms are ramping up production and distribution in response to consumers’ desire for fresh, local products. Their growth is also fueled by their close proximity to retailers that have long relied on produce from California and Arizona — and, to some extent, by persistent outbreaks of E. coli bacteria associated with romaine lettuce grown in soil.

Now it’s doubling its distribution to more than 30 states from 15 as its hydroponic greenhouse footprint expands to Chicago; Providence, Rhode Island; Baltimore and, in early 2020, Denver.

Earlier this month, Gotham Greens unveiled a new brand design for its offerings, which include basil, arugula, romaine lettuce and other leafy greens, plus dressings and dips. The rebranding was created in collaboration with Brooklyn design agency Gander and Gotham’s in-house creative team.

“We have built brand awareness through social media, grassroots marketing, partnerships and cultivating a community of Gotham Greens’ supporters who have helped to spread the word about our fresh local produce,” Viraj Puri, co-founder and CEO of Gotham, tells Marketing Daily.

Little Leaf Farms was founded in 2015 in Devens, Massachusetts. Its baby leaf lettuces are produced hydroponically (without soil) and delivered within 24 hours of being harvested. Northeast grocery chain Stew Leonard’s was the first retailer in the Connecticut and New York area to carry its products.

Asked if local producers like Gotham and Little Leaf are making a dent in sales of produce from traditional sources like the West Coast, Stew Leonard’s executive director of fresh foods, Dave Peden, says, “I would say they’re really starting to. There’s a lot more players coming into that segment of the business.”

According to Peden, proximity to distributors and retailers is a key element to the success of these players, given that produce from California and Arizona needs to be trucked cross-country. Being grown indoors also provides benefits.

“It all comes down to shelf life and freshness for the consumer. This lettuce is grown indoors, so you don’t have to worry about rain, too much sun or shade, too wet or too dry.”

Consumers have been turned off — some temporarily, some permanently — by potentially deadly outbreaks of E. coli contamination of romaine lettuce, the majority of which comes from the Salinas Valley of California and the Yuma, Arizona growing region, as The Washington Post reported last month. While there is no strong consensus as to what causes the outbreaks, the Post said contaminated agricultural water “is a prime suspect.”

“The rise in recent food-born illness linked to large West Coast operations has underscored the need for greater traceability and transparency in the supply chain and has raised the profile for greenhouse-grown produce,” Puri says. “The greenhouse vegetable industry has an inherent advantage in terms of food safety compared to open-field farming.”