How The President's 'Fox Feedback Loop' Has Reshaped American Politics 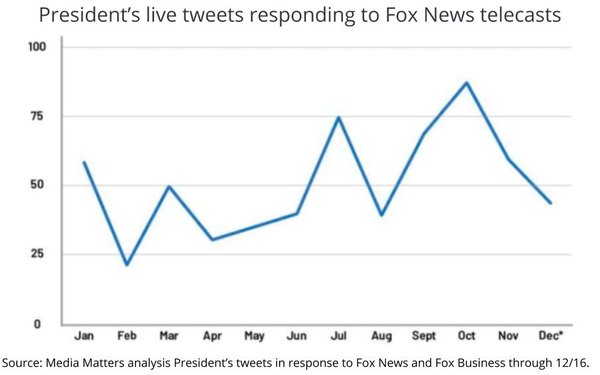 The President's incessant live tweeting in response to comments made on Fox News and/or Fox Business has created a "feedback loop" that has disrupted American political discourse, according to an analysis released this morning by watchdog group Media Matters.

The analysis found the President live tweeted 608 times so far this year in response to what he was watching on the two Fox cable news channels, especially his most "sycophantic" shows: "Fox & Friends," "Lou Dobbs Tonight," and "Hannity."

""More than ever before, Trump’s Fox fanaticism this year drove the federal policymaking process and political reality, with a tangible impact on the lives of the American public," Media Matters Senior Fellow Matt Gertz writes, adding, "2019 began with the federal government partially shut down because, as one Fox host put it, network star Sean Hannity was 'running this government' and Trump had taken his advice over that of the president's congressional allies.

"In the months that followed, the administration appeared to pardon war criminals, decide whether to order military strikes, float sweeping policy changes, award a $400 million federal contract, and initiate federal investigations based on the advice the president was getting through his television set and in behind-the-scenes discussions with Fox personalities."