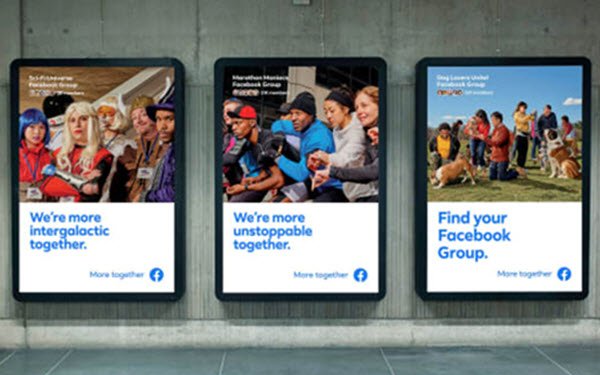 Facebook has revealed that it is set to run its first Super Bowl ad.

The 60-second ad, planned for Super Bowl LIV, will be part of the social giant’s “More Together” campaign for Facebook Groups (shown above), which was launched in May.

The ad, which will feature cameos by Chris Rock and Sylvester Stallone, will show people from varying backgrounds coming together “over shared interests and experiences” through Facebook Groups, according to a spokesperson for the company.

Fox Corp., which reportedly sold 30-second 2020 Super Bowl ads for more than $5 million, announced late last month that it had sold out its entire ad inventory for the upcoming game — one of the fastest sellouts in recent years.

“More Together” is the first major Facebook branding campaign launched under Antonio Lucio, who joined the company from HP Inc. in August 2018. Lucio has said that the campaign could double Facebook’s ad spend compared to recent years.

Facebook hopes that extending the "More Together" campaign’s message of unity in an ad that reaches the year’s largest TV audience will help defuse some of the negative brand and business consequences stemming from growing concern about its practices.