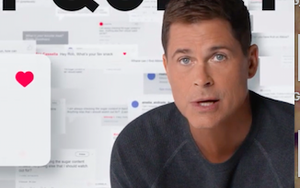 Having signed on for another three years as an official brand spokesman, actor Rob Lowe kicks off a new campaign next week for low-carb lifestyle brand Atkins titled “Any Questions?”

Digital and television spots in the campaign feature Lowe -- an Atkins enthusiast for 20 years -- answering queries emanating from social media platforms on the benefits of a low-carb, low-sugar lifestyle.

“What’s the difference between Keto and Atkins?” Lowe asks in one spot, referring to the popular high-fat, low-carb diet. “To me, Atkins is really keto you can live with. Because you can have more carbs and some fruits when you do keto the Atkins way.”

For the first time, the new campaign will go beyond cable TV to target sports- and lifestyle-focused programming, prime-time regional network TV and connected TV, along with expanded digital media placements.

“Rob has an intrinsic connection to the Atkins brand and we look forward to working together in our partnership, continuing to raise awareness for our nutritional philosophy and mission,” CMO Scott Parker said in a statement.

Creative for the new campaign was executed by Acme Idea Company of Norwalk, Connecticut.

Atkins parent Simply Good Foods said it increased marketing spending by 36% in its recently ended fiscal 2019, a period in which retail growth increased 19.5%.

New Atkins customers purchase “somewhere in the mid-30 servings” in the first year and, by year three, are buying close to 100 servings, president and CEO Joe Scalzo said in a recent conference call with investors.

“That's the one thing about this business that's really interesting. You have people that are daily eaters of our products or snacking on our product every day.”

He noted, “For perspective, fiscal 2019 was the strongest year of total retail growth for Atkins in over a decade, with over $100 million in retail growth.”

In October, Atkins completed its $1 billion acquisition of Quest Nutrition -- known in some weight-watching circles for its Quest Protein Bars -- further extending its footprint in foods and snacks.