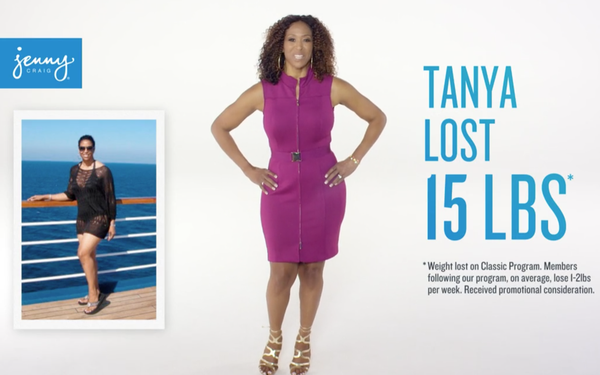 ‘Tis almost the season to start that 2020 diet, and Jenny Craig wants to be first in line for your business.

The weight-loss company is launching a new ad campaign, highlighting real people, personalization and its DNA Decoder approach. It’s also expanding by opening centers in Walgreens around the country.

With the Jenny30 program, Jenny Craig claims to give members tools to lose up to 16 pounds in 30 days. And with Simple60, it promises its most customized offering yet. (The DNA test is included in the 60-day option.) It’s also introduced 20 new foods, many of them supporting low-carb dieters.

The company, which announced a deal to open in 100 Walgreens earlier this fall, says the expansion is part of its “deepening commitment to connecting with members in ways that fit into their everyday lives—in-person, online and at home.”

The Walgreens locations include those in Dallas, Houston, Philadelphia and Phoenix. Jenny Craig operates 500 company-owned and franchise centers in the U.S. and 600 around the world.

The new ads feature 14 members from around the U.S., and spots are running on TV as well as digitally.

H.I.G. Capital acquired Jenny Craig earlier this year from North Castle Partners, which bought it from Nestle back in 2013.

It’s been a turbulent few years for rough weight-loss brands, as new digital entrants, such as Noom, disrupt the category. WW, formerly Weight Watchers, is still bouncing back from an early, sometimes-brutal response (stock plunges, marketing expert criticism) to its rebranding efforts.