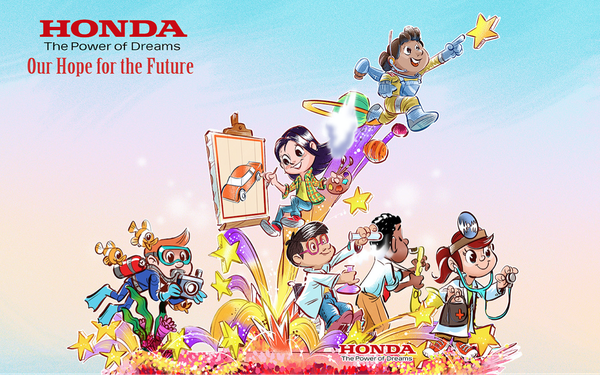 Honda is the first automaker to leverage Snapchat’s Marker Tech feature as part of a brand activation, according to Honda. Honda AOR RPA created the campaign.

Honda’s Rose Parade Snapchat Marker Tech experience and World Lens will launch Dec. 31. When users point their Snapchat app at any official Rose Parade logo within the Rose Parade route, the Snapchat app will populate an immersive, three-dimensional AR red rose and creative elements from Honda’s “Our Hope for the Future” float.

Consumers viewing the parade from home can experience the Honda float up close and personal by scanning the Snapcode to unlock Honda’s Rose Parade World Lens Snapchat Lens. When in selfie mode, the World Lens produces a red rose crown for the user with rose petals in the background.

Honda has the lead float in the Rose Parade, “Our Hope for the Future,” featuring six children pursuing their dreams through a variety of activities. Each child expresses a different passion: space exploration, environmental stewardship, medical science, the arts and scientific research.

Float riders will include the 2019 Honda Campus All-Star Challenge national champions from Spelman College and Rachel Garcia, the winner of the 2019 Honda Cup which is awarded by the Collegiate Women Sports Awards.

The 2020 Honda CR-V Hybrid will also be the Parade’s official pace car and the 2020 Acura MDX PMC Edition will serve as the sound car. The 2020 CR-V Hybrid is the first electrified SUV from the Honda brand in America.

Honda and the Tournament of Roses have worked together for nearly six decades, beginning when the automaker provided two-wheeled vehicles for the 1962 Parade operations. Honda has been a float participant in the Rose Parade since 1977, and has provided the official Tournament of Roses vehicle since 1994. The automaker became the first-ever presenting sponsor of the event in 2011.