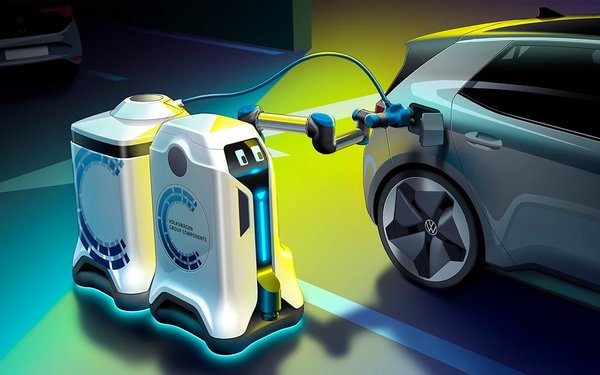 The automaker has created a prototype of a roving robot that can bring itself to an electric car in a parking lot or garage and charge it.

The mobile charging station, started by app or vehicle-to-vehicle communication, drives itself to the car that needs charging and communicates with it.

The opening of the charging socket, connecting the plug, charges and decouples the plug without any human interaction.

The robot sports a camera, laser scanner and ultrasonic sensors.

“The mobile charging robot will spark a revolution when it comes to charging in different parking facilities, such as multistory car parks, parking spaces and underground car parks because we bring the charging infrastructure to the car and not the other way around,” stated Mark Möller, head of development at Volkswagen Group Components. “We are making almost every car park electric.”

A charging robot can move several battery wagons at the same time, and the storage devices allow for quick charging.

“Depending on the size of the parking area or the underground car park, several charging robots can be employed simultaneously so that several vehicles can be attended to,” states Volkswagen.

No word on a possible date for a market launch of the charging robot. Also, no word on what a charge might cost.