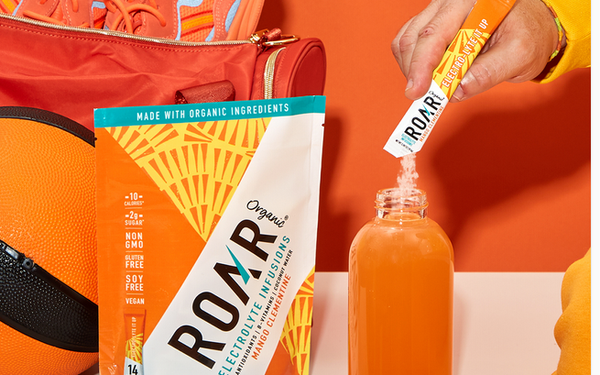 One year ago, Roar Organic received its first institutional funding of $5.6 million, with which it would hire a new management team grounded in beverages and startups, rejuvenate packaging and point-of-sale materials and step up its social media presence.

The goal: Position Roar not as an energy or sports drink but as “a tool to empower female millennial hustlers,” says CMO Eric Berniker, who joined the company last February following stints at Core Hydration, Pirate’s Booty and Glaceau. “It’s been a very formative and strong performance year for us.”

In this interview with CPG FYI, Berniker explains how Roar has managed to position itself in the wild and crazy bottled beverage category alongside kingpins like Coca-Cola’s Vitaminwater and PepsiCo’s Gatorade.

CPG FYI: Explain the origin of the Roar brand.

Berniker: Roar Organic came about by looking at what was in the electrolyte door at a convenience store or looking at a shelf in a grocery store. All the options were very male-dominated, very aggressively positioned and packaged, and very team-sport-focused.

No one was really speaking to how fitness has evolved — from wellness to mind and body, from on the field to in the gym to that all-day mentality. Most importantly, no one was speaking to the person driving this evolution, who is the female millennial.

CPG FYI: Roar is vegan, low-calorie, low-sugar and electrolyte-infused. How did you go about connecting with your target consumer?

Berniker: We partnered with four innovative, entrepreneurial women for our Roar Models campaign on social media and have seen really strong reactions to the content and engagement. Then all of a sudden we’re getting a lot of inbounds from influencers both micro and macro saying “I love what you’re doing, I’d love to get involved with you guys” with events or partnerships.

Also, when you start to show up in lifestyle and pop culture venues, it’s a good signal of how you’re connecting: places like Us Weekly, In Touch, Life & Style, along with health and wellness magazines.

CPG FYI: Have you done any television advertising?

Berniker: As of right now, we are really digitally focused. Organic plus paid social: that’s where our consumer lives and breathes. The content we’re putting out there is more having a conversation with our consumer versus speaking at them.

CPG FYI: How does an unknown beverage brand gain distribution in a small-layout, convenience/pharmacy chain like Duane Reade in New York City?

Berniker: All of these accounts get pitched every day by new brands, especially in the beverage space, and there’s blurred categories so it can be really challenging. Our difference is that we are suited to today’s modern consumer and, at the same time, we’re different than other brands out there.

Berniker: At Safeway, where we’ve increased our store count by about 1,000 stores, we’re seeing velocity gains of up to 350%. That shows how quickly we’re actually turning on the shelf in terms of dollars per store per week.

On a national standpoint, we’re now turning faster than brands that come from the big boy companies, if you will.

CPG FYI: Have you brought new consumers into the advanced hydration category?

Berniker: We’re still waiting to hear back on some of our presentations, but  we already have about 3,500 new doors of distribution and there’s a potential for us to get up to 10,000.

CPG FYI: You just introduced electrolyte powder sticks to supplement your ready-to-drink line. What is the strategy behind that product?

Berniker: We’re creating another tool or another form that our consumer can take with them wherever they go — in their gym bag, backpack, in their desk at work or in their airplane carryon. All they need is the electrolyte stick, a refillable water bottle and the water stations that are becoming more prevalent everywhere you go.