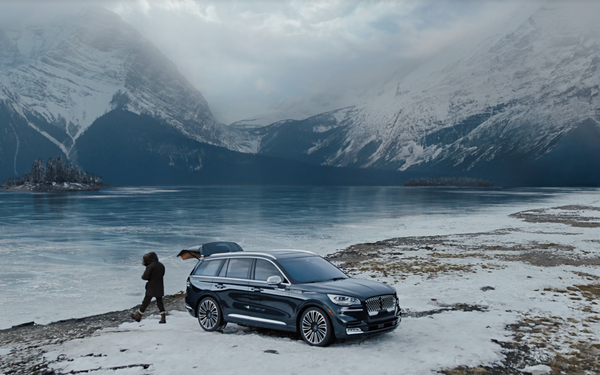 Lincoln is launching a new campaign for the Lincoln Aviator featuring Matthew McConaughey, set against the dramatic beauty of winter.

Creative shows McConaughey using his Aviator as a shelter from the elements after carving a hole in the ice and dropping a line.

“Beats jiggin’ in a shanty,” McConaughey says as he relaxes in the warmth of his Aviator and sketches in his travel journal -- the same journal that was shown in earlier campaigns introducing the Lincoln Navigator. The spot ends with the tagline “The Power of Sanctuary.”

The campaign launches Saturday on multiple platforms, with a YouTube and Twitter takeover and a broadcast debut during the college football playoffs beginning with the Peach Bowl at 4 p.m. EST on ESPN.

"It's clear that no matter the activity or the environment, Aviator provides a serene sanctuary with luxurious amenities, intuitive technology and the versatility of its three rows of seats,” says Eric Peterson, Lincoln marketing communications manager, in a statement.

The piece, produced by Hudson Rouge, was directed by cinematographer and director Lance Acord, known for movies like “Lost in Translation,” and shorts like this year’s “E.T.: A Holiday Reunion.”

Jon Pearce, global chief creative officer, Hudson Rouge, points to the mood of the piece playing into both the storyline and the vehicle itself.

“There’s definitely a feeling of serenity, of introspection,” he says. “Matthew is in his happy place. He’s doing what he wants to do, where he wants to do it – not only ice fishing, but in this beautiful, luxury SUV. It’s about being at ease, about being your best self, about finding your own piece of sanctuary in a stressful world.”