Obama Ties Current POTUS As 'Most Admired Man' In 2019 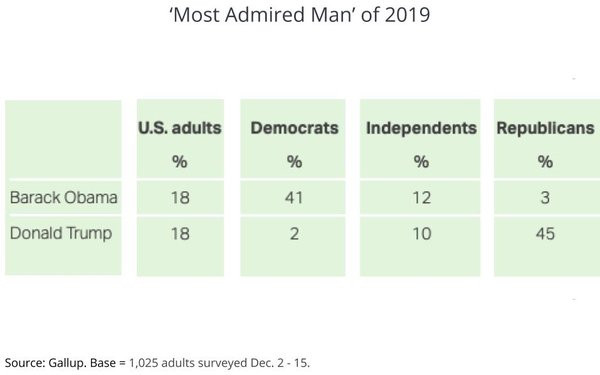 Two Presidents -- the current one and former President Barack Obama -- tied as the "most admired man" of 2019, according to an annual poll released today by Gallup.

Not surprisingly, there partisan cross-tabs beneath their averages.

It was also the 12th time President Obama ranked in the top spot, and the first for the current President, albeit in a tie.

Historically, the current President normally ties as the most admired man in America in (58 of 72 prior) Gallup polls.

"When the incumbent President is not the choice, it is usually because he is unpopular politically, which was the case for Trump in 2017 (36% approval rating) and 2018 (40%)," Gallup noted in its analysis.

Eleven percent of Americans named a relative or friend as the man they admire most; 18% named some other living man; and 25% did not name anyone.

Former First Lady Michelle Obama was the most admired woman of 2019 and the only one to score in the double digits among respondents.

Queen Elizabeth finished in the top 10 for the 51st time, more than any other woman. Winfrey (32 times) and Clinton (28) have also made regular appearances in the top 10. The Rev. Billy Graham has the most top 10 finishes for either gender: a total of 61 between 1955 and 2017 before his death last year. 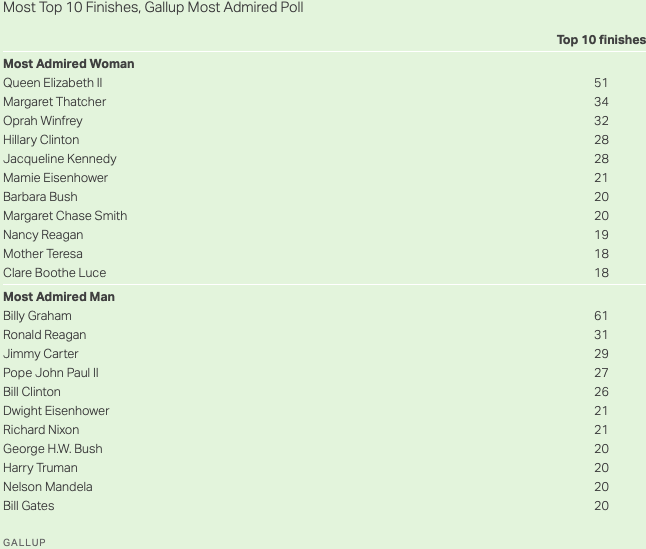