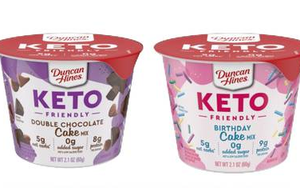 Conagra inherited the ailing Wish Bone salad dressing brand with its 2018 acquisition of Pinnacle Foods. Now it’s about to double down with the launch of vegetable-based Healthy Choice “power dressings” with nondairy and no-soy options.

This response to consumer taste trends is also reflected in Conagra’s pending launch of keto-friendly cake mixes in its Duncan Hines line, as part of the repositioning of Duncan as a “sweet-treat” brand. Keto is a reference to a popular diet in which people drastically reduce their carbohydrate intake and replace it with fat.

“We're excited to participate in the salad dressings category and believe it's right for disruptive innovation,” president and CEO Sean Connolly said last week in a conference call to discuss the company’s second fiscal quarter financials.

The product extension “builds on the success of our [Healthy Choice] Power Bowl frozen meals by bringing modern attributes that are relevant to consumers to a large category.”

He cited “on-trend, keto-friendly cakes” from the brand as one of the latest line extensions. It’s not clear if the keto-friendly iterations are simply new stock-keeping units for Duncan Hines or meant to replace existing ones. Marketing Daily reached out to Conagra for clarification but had not heard back by deadline.

Eliminating poor-selling SKUs continues to be a priority for Conagra as it competes for retailer shelf space for its new launches.

“As expected, sales and distribution on Birds Eye declined as we removed lower-performing SKUs from the market. Now, the brand’s distribution trend is starting to bend behind new innovation launches,” Connolly explained.

Birds Eye dollar share of retail sales in the frozen vegetable category — not including private label products — grew by 0.5% in the second quarter, according to data from IRI. Retail sales of Healthy Choice single-serve frozen meals rose 13% in the quarter, versus the same period a year ago.

Wish Bone remains a work in progress. After years of waning sales, the brand saw a spike in August followed by more declines and then a spike in November.

The company also inherited Lender’s Bagels with its Pinnacle acquisition, but Connolly said Conagra intends to sell Lender’s, as it did the cooking oil brand Wesson earlier this year.