Goodyear Puts Used Tires To Use With Mascot Statues 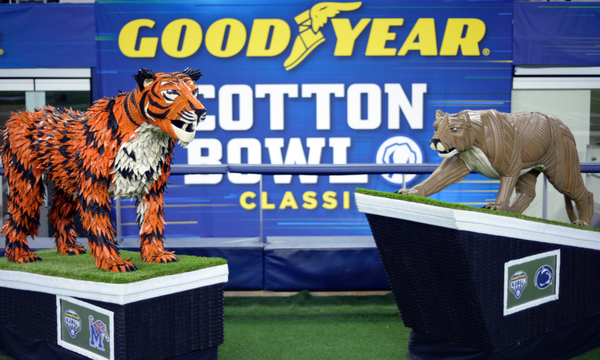 Goodyear created massive statues of the Penn State Nittany Lion and Memphis’ Tom the Tiger mascots, made entirely from hundreds of tires.

The statues were unveiled at the Goodyear Cotton Bowl Classic on Dec. 28 and were donated to the schools after the game. The brand created a time-lapse video of the statutes being built, now featured on social media.

Each statue weighs more than 200 pounds and stands over five feet tall. Collectively, they were made from more than 260 tires, and took 400-plus hours to complete.

These statues continue a four-year tire art tradition at Cotton Bowl, which has seen the likes of the Notre Dame Leprechaun, Ohio State’s Brutus the Buckeye and the USC Trojan.

In 2018, Goodyear announced a multiyear agreement to renew its title sponsorship of the Goodyear Cotton Bowl Classic, which extends its more than six-decade association with college football, dating back to when the Goodyear Blimp first provided aerial coverage at the 1955 Rose Bowl game.

To celebrate Goodyear's legacy in the sport, the National Football Foundation and College Hall of Fame inducted the Goodyear Blimp as an honorary member of the College Football Hall of Fame earlier this month.