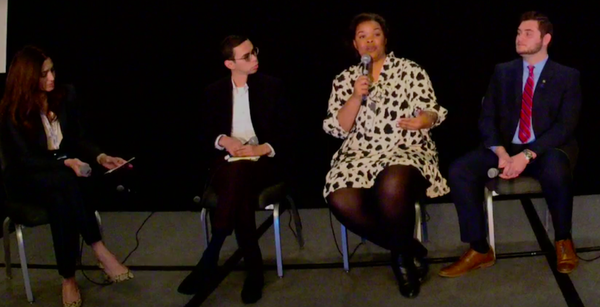 What if Martin Luther King had had Twitter? Jara Butler, National Training and Services Director, for the Democratic Legislative Campaign Committee (second from right), mused about #ihaveadream and #marchonwashington at our Marketing Politics conference in Washington, D.C.

"Look at the last decade, the way young people consume information. #blacklivesmatter went on to become a march, a cry for justice, legislation. We took a hashtag to a ballot box and then to a march with it."

"The civil rights movement was for all marginalized communities," she said. "Voting is something in the black community that we take very seriously. In 2018, people that were running reflected the electorate. There were more women, more LGTBQ, blacks, Latinos. The face of America was running in 2018.

"It came from a lot of work on the ground. People were motivated through knocking on doors. Voters showed up for Doug Jones and in Virginia, led by black women through mobilization and aggressive campaigning. Who we missed in 2016, we were making sure we don't miss them in 2018 and make sure we don't miss those folks in 2020. We have to make sure they have a seat at the table and not be waiting until September or October."

Butler was cagey about her age but admitted her first vote was for Jesse Jackson. "I'm not that old but I am. I have one foot in both generations. And I'm learning a lot from the younger generation. They have more complexity.

"We can't ever value the importance of branding and making sure we are reaching out to these communities and understanding where they are getting their information and that means hire people that look like the community.

"Black Twitter in any instance can go viral; memes originated from that. Look at the number of likes, it becomes part of our social consciousness. The electorate in places like Texas is a lot younger. They consume differently than we ever have before. I grew up in the digital age but I'm still learning as we go."