The World According To Goop: Gwyneth's New 'Lab' On Netflix 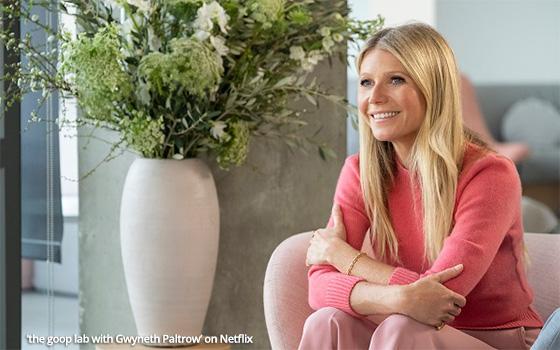 My dictionary has a succinct definition for “goop” that consists of just two nouns -- each a synonym for goop: Goo and gunk.

The only other form the dictionary provides for the word goop is the adjective “goopy,” which one can infer is synonymous with gooey or gunky.

It is tempting to apply these goopy, gooey, gunky descriptors to any consideration of the goop lifestyle-brand empire of Gwyneth Paltrow.

Since 2007, the foundation of this empire has been her website, goop.com. And now she is adding a TV show -- “the goop lab with Gwyneth Paltrow” (all lower-cased except for Gwyneth's name) starting this Friday (Jan. 24) on Netflix.

As tempting as it is to label all of this goop as gooey or gunky, that is not exactly fair because, as my mother might have said about Gwyneth, she means well.

It is certainly true that reactions to Gwyneth Paltrow's goop are varied. Some react to it with a tone of eye-rolling skepticism. Or at the very least, that has been the tone of at least some of the media coverage of goop.com over the years.

However, many others must really take to it. Otherwise, it would have died years ago. It is for these people (and others like them who have not yet been lured into Gwyneth's goop) that this Netflix brand extension has likely been produced.

By all appearances, the TV show is on-brand. In its positioning of the show, Netflix describes it as “a curiosity-driven exploration of boundary-pushing wellness topics -- brought to you by Gwyneth Paltrow's lifestyle site, goop.”

The statement bears a resemblance to the way goop positions itself on the goop.com website. The site and the show apparently intersect at “curiosity.”

"We take a curious [italics added], open-minded, and service-centric approach to the work we do,” says the description on the website.

“We ask questions about all of it. We believe that people can take what serves them and leave what doesn't. We recommend what we love and what we think is worthy of your time and wallet. We value your trust above all things.”

To coin a phrase: We report, you decide. That seems to be the aim of the TV show, at least in part.

Unfortunately, however, in the opening episode of “the goop lab” (the TV show), Gwyneth and her colleagues have produced a “report” that plays like a straight-up endorsement of drug use.

They would likely insist it is not, but one comes away from watching this half-hour episode -- subtitled “The Healing Trip” -- believing that ingesting psychedelic mushrooms is perfectly OK as a means of self-discovery and as a psychoanalytic tool.

To bolster this point of view, various advocates of so-called psychedelic-assisted psychotherapy are interviewed who believe that using psychedelic mushrooms (also known by the name of their naturally occurring, main, acting ingredient, psilocybin) is virtually harmless as long as elements such as dosages, settings (i.e., environment) and the subsequent experience (otherwise known as a trip) are carefully monitored and controlled.

However, in this entire first episode of “the goop lab,” no interview subject emerges to give a dissenting thought or opinion that the use of psychedelic drugs, in this or any context, represents little more than a means of escaping from reality -- which is why many people turn to drugs, marijuana, alcohol, overeating or a host of other addictive, self-soothing behaviors.

In fact, drug use is a huge problem in this country that takes a very heavy social and economic toll on communities and families.

This part of the drug story goes unexplored in “the goop lab” as we watch a group of people -- some of whom are employees of Gwyneth's -- embarking on a psilocybin retreat at a facility in Jamaica (where psychedelic mushrooms are decriminalized or possibly even legal -- unlike in the United States).

We see these people in a lush, yoga-like setting ingesting their substances in the form of a “tea” (in which the mushrooms have been steeped in hot water) and then closing their eyes and reclining on yoga mats.

Within a short time, at least some of them are overcome with strong feelings as they apparently come into vivid contact with various subconscious thoughts and memories.

The problem is: While these people might be seeing all kinds of whirling, twirling, Technicolor images inside their heads that are fascinating to them, watching them have this experience from the outside is like watching virtually nothing at all.

As a TV show, it may have been more entertaining if Gwyneth herself was seen experimenting with psilocybin along with her underlings. But alas, GP (as she is sometimes known in the goop universe) does not participate.