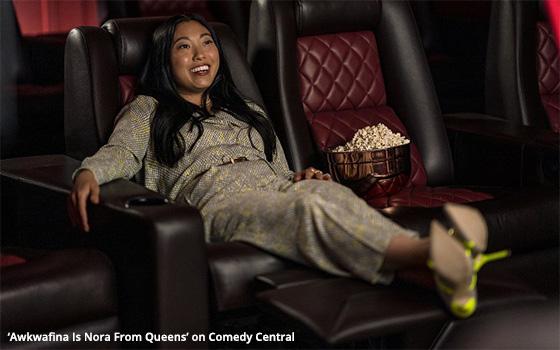 The talent of a fresh new star goes to waste (sometimes literally) in the new Comedy Central series called “Awkwafina Is Nora From Queens.”

The star is 31-year-old Awkwafina -- a stage name (that she would probably prefer to call an “alter ego”) apparently inspired by a brand of bottled water.

Her real name is Nora Lum, and she was born in Long Island and raised principally in Forest Hills, Queens. Her new show, premiering Wednesday night, is meant to be vaguely autobiographical, but only in a very fictional sense.

This scenario might bear some very superficial resemblance to a household or lifestyle Nora/Awkwafina might be familiar with, but it does not reflect her real life currently.

The real Awkwafina is a rising movie star. She was in “Ocean's Eight,” “Crazy Rich Asians” and most notably “The Farewell,” for which she just won a Golden Globe earlier this month.

The list of credits on her IMDB.com page for 2019 alone indicate that she is in great demand and very well-employed, if not over-employed.

She is such a hot commodity that Comedy Central renewed “Awkwafina Is Nora From Queens” for a second season on Jan. 14, nine days after her Golden Globe win and eight days before the first episode of the show's first season had even aired yet.

Get her while she's hot, right? The second-season renewal probably represents shrewd show-business practice on Comedy Central's part (actually on the part of parent company ViacomCBS).

So, what are they renewing? In considering the work of Awkwafina, it seems to touch on at least two recurring themes or subjects: Grandmothers and vaginas.

“The Farewell” was a movie about a young Chinese-American woman who has a close relationship with her grandmother who still lives in China. It was a great movie.

Awkwafina played the young woman in the movie, but the movie was not hers. It was conceived and written by someone else.

In “Awkwafina,” the Comedy Central show, Awkwafina/Nora again has a close relationship with her grandmother. Among the topics that arise in their interactions is the subject of her grandmother's vagina.

And once again, I feel obligated to mention here how difficult it is to write about these subjects in the process of reviewing TV shows that are all about them.

As it happens, Awkwafina first came to prominence in 2012 with an original rap video about her own genitalia that was titled “My Vag” (which has racked up more than 5 million views on YouTube). Thus, it does not seem to be too farfetched to conclude that this subject is of keen interest to Awkwafina, and possibly an obsession.

Younger, adult audiences for whom this “Awkwafina” comedy series and others like it are created seem to embrace this kind of material. Why they embrace it is a question I ask myself every time I see one of these new TV comedies in which the actual comedy remains well-hidden.

Perhaps younger people are satisfied simply with identifying with characters such as Awkwafina. For them, laughing out loud or otherwise having fun watching a TV comedy series is not something they are particularly interested in. Perhaps they have been exposed to so little real comedy in their lives that the experience is virtually unknown to them.

However one chooses to explain the state of TV comedy today, the opinion here is that “Awkwafina Is Nora From Queens” is a depressing, negative, vulgar mess. Look for it to win multiple awards.